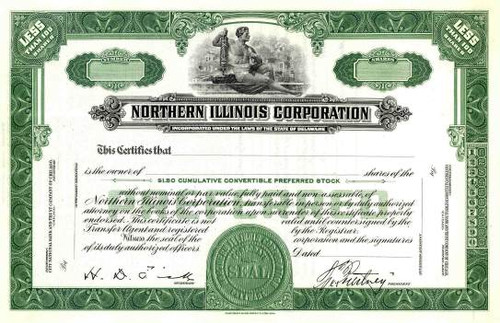 Beautifully engraved SPECIMEN certificate from the Northern Illinois Corporation. This historic document was printed by the Northern Banknote Company in 1936 and has an ornate border around it with a vignette of an allegorical man. This item has the printed signatures of the Company's President ( Thomas E. Courtney ) and Secretary.

Certificate Vignette
Thomas E. Courtney began work as a Chicago street-corner newsboy. On his second job, he washed cars. In 1922, without a formal education, Courtney formed Northern Illinois Corporation of DeKalb, Illinois, a multi-million-dollar finance organization, which under his supervision grant loans from $20 to $1 million for anything from renting a room to building a complete factory. Courtney won the Army and Navy "E" for his defense contributions. History from the Horatio Alger Association.