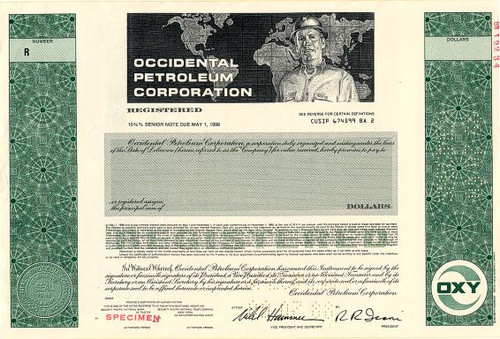 Beautiful engraved specimen certificate from the Occidental Petroleum Corporation dated in 1988. This historic document was printed by United States Banknote Company and has an ornate border around it with a vignette of a company worker next to a map of the world. This item has the printed signatures of the company's officers and is over 20 years old.

Certificate Vignette
Occidental Petroleum Corporation ("Oxy") NYSE: OXY is an international oil and gas exploration and production company with operations in the United States, the Middle East, North Africa, and South America. The company nickname "Oxy" began in 1964 in reference to Occidental's NYSE stock ticker. Headquartered in Los Angeles, California, Oxy is the fourth largest U.S. oil and gas company, based on equity market capitalization. Oxy is the largest oil producer in Texas and the largest natural gas producer in California, with additional operations in Kansas, Oklahoma, Colorado and New Mexico. Oxy's wholly-owned subsidiary, OxyChem, manufactures and markets chlor-alkali products and vinyls. Oxy was founded in 1920. In 1957 Dr. Armand Hammer was elected president and CEO. In 1961, Oxy discovered California's second largest natural gas field in the Arbuckle area of the Sacramento basin at Lathrop. Over the next 10 years, Oxy expanded worldwide operations with efforts in Libya, Peru, Venezuela, Bolivia, Trinidad and the United Kingdom. Occidental won exploration rights in Libya in 1965 and achieved exploration and development success until all activities were suspended in 1986 as the result of economic sanctions imposed by the United States government. In 1968, Oxy entered the chemical business with the acquisition of Hooker Chemicals. This was 26 years after the contamination at Love Canal. On July 6, 1988 a fire on Piper Alpha, an oil platform in the North Sea, caused the biggest disaster in offshore oil industry's history. Today Occidental Chemical Corporation (OxyChem) is a leading chemical manufacturer with interests in basic chemicals, vinyls and performance chemical products. In 1994, Dr. Ray Irani became President and CEO of Oxy. In 2005, Oxy was among 53 entities that contributed the maximum of $250,000 to the second inauguration of President George W. Bush. History from Wikipedia and OldCompanyResearch.com (old stock certificate research service). About Specimens Specimen Certificates are actual certificates that have never been issued. They were usually kept by the printers in their permanent archives as their only example of a particular certificate. Sometimes you will see a hand stamp on the certificate that says "Do not remove from file". Specimens were also used to show prospective clients different types of certificate designs that were available. Specimen certificates are usually much scarcer than issued certificates. In fact, many times they are the only way to get a certificate for a particular company because the issued certificates were redeemed and destroyed. In a few instances, Specimen certificates we made for a company but were never used because a different design was chosen by the company. These certificates are normally stamped "Specimen" or they have small holes spelling the word specimen. Most of the time they don't have a serial number, or they have a serial number of 00000. This is an exciting sector of the hobby that grown in popularity over the past several years.