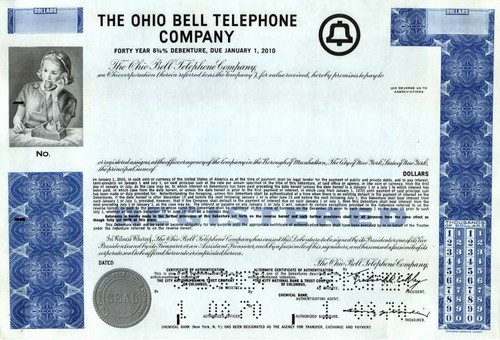 Beautifully engraved specimen bond certificate from the Ohio Bell Telephone Company printed in 1970. This historic document was printed by the American Banknote Company and has an ornate border with a vignette of a woman talking on an early push button landline telephone. This item has the printed signatures of the Company's President and Treasurer. 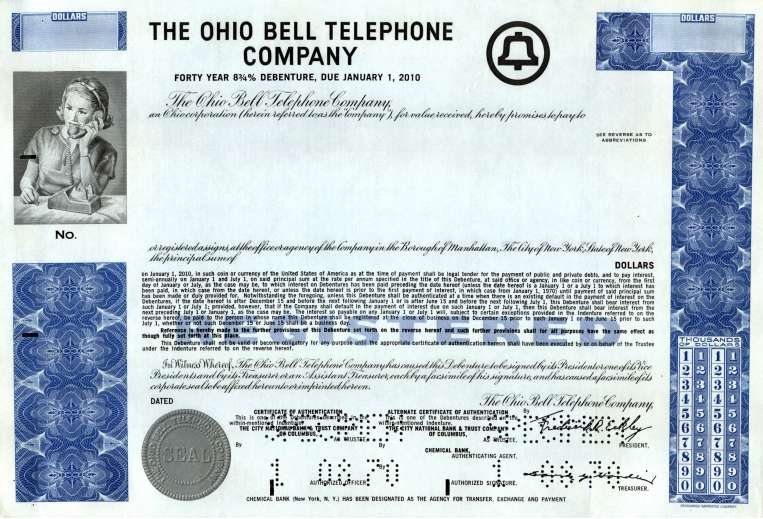 Certificate
The Ohio Bell Telephone Company is the Bell Operating Company serving most of Ohio. It is a wholly owned subsidiary of AT&T. Its headquarters is the Ohio Bell Building at 750 Huron Road, Cleveland, Ohio. Ohio Bell is not affiliated with Cincinnati Bell, which serves Cincinnati and other surrounding communities. After the 1984 Bell System Divestiture, Ohio Bell became a part of Ameritech, one of the seven original Regional Bell Operating Companies. The Ohio Bell name continued to be used until January 1993, when Ameritech dropped all of its individual Bell Operating Company names in favor of its corporate name for marketing purposes, when it began doing business as Ameritech Ohio. After SBC acquired Ameritech in 1999, it continued to retain the "Ameritech" brand until 2001, when Ohio Bell began doing business as SBC Ameritech Ohio. A year later, in 2002, SBC dropped the Ameritech name in favor of "SBC" as a national brand, resulting in the trade name of SBC Ohio. On January 15, 2006, after SBC's acquisition of AT&T, Ohio Bell's trade name was changed, again, to AT&T Ohio, a name which it continues to use today. History from Encyberpedia and OldCompany.com (old stock certificate research service)