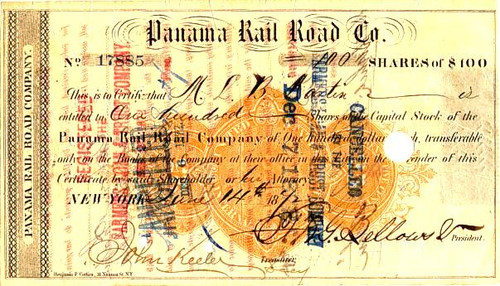 Beautifully printed certificate from the Panama Rail Road Co. issued in 1872. This historic document has an ornate border around it with an overpint of an IRS Revenue Stamp. This item is hand signed by the Company's President and Treasurer and is over 133 years old. The California Gold Rush and the Railroad Even before the United States acquired California after the Mexican War (1846-48), many heading for California used the Panama isthmus crossing in preference to the long and dangerous wagon route across the vast plains and rugged mountain ranges. Discovery of gold in 1848 increased traffic greatly. In 1847 a group of New York financiers organized the Panama Railroad Company. This company secured an exclusive concession from Colombia allowing construction of a crossing, which might be by road, rail, river, or a combination. After surveys, a railroad was chosen, and a new contract so specifying was obtained in 1850. The railroad track followed generally the line of the present canal. The first through train from the Atlantic to the Pacific side ran on the completed track on January 28,1855. The gold rush traffic, even before the completion of the railroad, restored Panama's prosperity. Between 1848 and 1869, about 375,000 persons crossed the isthmus from the Atlantic to the Pacific, and 225,000 crossed in the opposite direction. Prices for food and services were greatly inflated, producing enormous profits from meals and lodging. The railroad also created a new city and port at the Atlantic terminus of the line. The town that immediately sprang up to accommodate the railroad offices, warehouses, docks, and shops and to lodge both railroad workers and passengers soon became, and remains, the second largest in the country. United States citizens named it Aspinwall, after one of the founders of the Panama Railroad Company, but the Panamanians christened it ColÃ³n, in honor of Columbus. Both names were used for many years, but because the Panamanians insisted that no such place as Aspinwall existed and refused to deliver mail so addressed, the name ColÃ³n prevailed. The Watermelon War The gold rush and the railroad also brought the United States "Wild West" to the isthmus. The forty-niners tended to be an unruly lot, usually bored as they waited for a ship to California, frequently drunk, and often armed. Many also displayed prejudice verging on contempt for other races and cultures. The so-called Watermelon War of 1856, in which at least sixteen persons were killed, was the most serious clash of races and cultures of the period. In 1869 the first transcontinental railroad was completed in the United States. This development reduced passenger and freight traffic across the isthmus and diminished the amount of gold and silver shipped east. During the height of the gold rush, however, from 1855 to 1858, only one-tenth of the ordinary commercial freight was destined for or originated in California. The balance concerned trade of the North Americans with Europe and Asia. The railroad company, because of its exceptionally high return on a capitalization that never exceeded US$7 million, paid a total of nearly US$38 million in dividends between 1853 and 1905. Panama received US$25,000 from Colombia's annuity and benefited from transient trade and some inflow of capital.