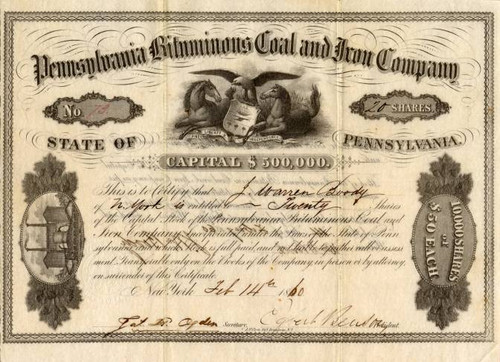 Beautiful certificate from the Pennsylvania Bituminous Coal and Iron Company issued in 1860. This historic document has an ornate border around it with a vignette of the Pennsylvania State Seal. This item has the original signatures of the Company's officers, and is over 156 years old. 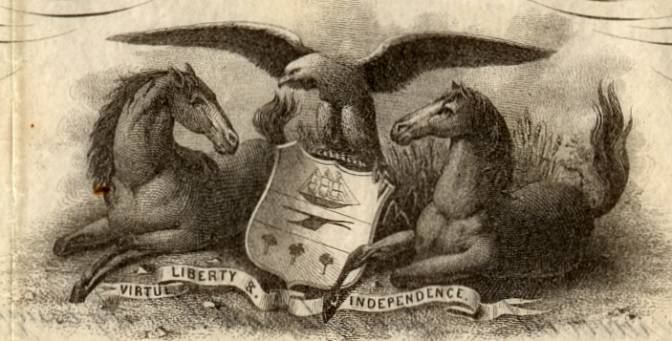 Certificate Vignette
History of Coal Mining Fueled by the Industrial Revolution, coal mining began in Pennsylvania in the mid-1700's. The initial reason was to support the Colonial Iron Industry and then Andrew Carnegie's steel mills in the 1800's and then the electric power plants which are currently used. In 1995, Pennsylvania was the fourth largest coal producing state in the United States. Pennsylvania produces two kinds of coal, anthracite (hard coal) and bituminous (soft coal). Bituminous coal was first mined in Pennsylvania at "Coal Hill" (Mount Washington), just across the Monongahela River from the city of Pittsburgh. The coal was extracted from drift mines in the Pittsburgh coal seam, which outcrops along the hillside, and transported by canoe to the nearby military garrison. By 1830, the city of Pittsburgh consumed more than 400 tons per day of bituminous coal for domestic and light industrial use. Development of the anthracite coalfields in eastern Pennsylvania had progressed to the point where "hard coal" had captured the eastern markets. Consequently, bituminous coal production in western Pennsylvania grew principally with western population growth, expansion and development of rail and river transportation facilities to the west, and the emergence of the steel industry. Towards the last half of the nineteenth century, the demand for steel generated by the explosive growth of the railroad industry and ship building concerns, began to further impact bituminous coal production in western Pennsylvania (Puglio, 1983). Over 10 billion tons of bituminous coal have been mined in 21 Pennsylvania counties during the past 200 years of mining. This is about one fourth of all coal ever mined in the United States. The counties containing coal mines are: Greene, Somerset, Armstrong, Indiana, Clearfield, Washington, Cambria, Jefferson, Westmoreland, Clarion, Elk, Fayette, Lycoming, Butler, Lawrence, Centre, Beaver, Blair, Allegheny, Venango and Mercer (ranked in order of production). About 40 different beds (layers) of coal are/were mined in Pennsylvania, they range from a few inches to over eight feet thick. About 75 percent of Pennsylvania's coal is mined from five different beds: the Pittsburgh Coal Seam, the Upper and Lower Freeport Coal Seam and the Upper and Lower Kittanning Coal Seam. There are several methods of mining, the room and pillar method, with or without retreat mining, and the long wall method. Until the maturation of modern longwall mining in the 1960s, Pennsylvania's underground bituminous coal production came almost exclusively from room-and-pillar mines. Early Room and pillar mining did not include retreat mining, because they relied on manual labor to cut the coal at the front and the coal was then hauled from the mine by horse or donkey and wagon. Although coal recovery is relatively low using the room-and-pillar method, normally ranging between 35 and 70 percent, this method has been active in Pennsylvania's Bituminous coal fields since the late 1700's. The mines associated with the Monastery Run Improvement Project, used mostly the Room-and-pillar method of mining the coal from the Pittsburgh Coal Seam. The method involves removing the coal in a room-like fashion. The coal mine is divided into rooms, these rooms are supported by blocks of coal, or pillars, there are appropriately sized to provide support for the overlying strata or roof, which usually includes pyrite (fool's gold), FeS2. In older mines, the size of the rooms normally ranged from 8 to 30 feet wide, while pillar sizes varied considerably. In order to collect a greater percentage of coal many companies used the room and pillar method with retreat mining. The companies complete their removal of the coal from the room and pillar method, the systematically remove the coal support pillars. This retreat phase (also known as "second mining") usually results in immediate or quick collapse of overburden (roof) into the unsupported opening. Room-and-pillar with retreat mining is a high-extraction mining method, generally recovering greater than 70% of the target coal seam. The room and pillar mining method is used in all of Pennsylvania's underground bituminous coal mines including longwall mining operations, where it is used to develop the haulage and ventilation systems, and to delineate and support the longwall panels. While room and pillar mining is still an important player in Pennsylvania, longwall mining continues to capture a growing portion of the Commonwealth's total underground production. Early mining companies did not have the technology or knowledge to realize the long term effects of mining, therefore, the hundreds of years of coal mining in Pennsylvania have left the descendents of coal miners over 2,400 miles of streams polluted by abandoned mine drainage from old mining operations. History from Wikipedia and OldCompany.com (old stock certificate research service)