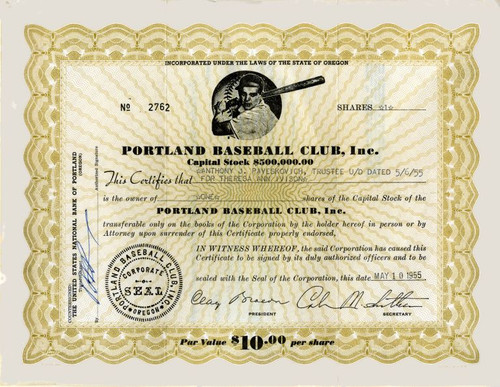 Beautiful certificate from the Portland Baseball Club, Inc. issued in 1955. This historic document has an ornate border around it with a vignette of a baseball player. This item has the printed signatures of the Company's President, Clay B. Brown, and Secretary. 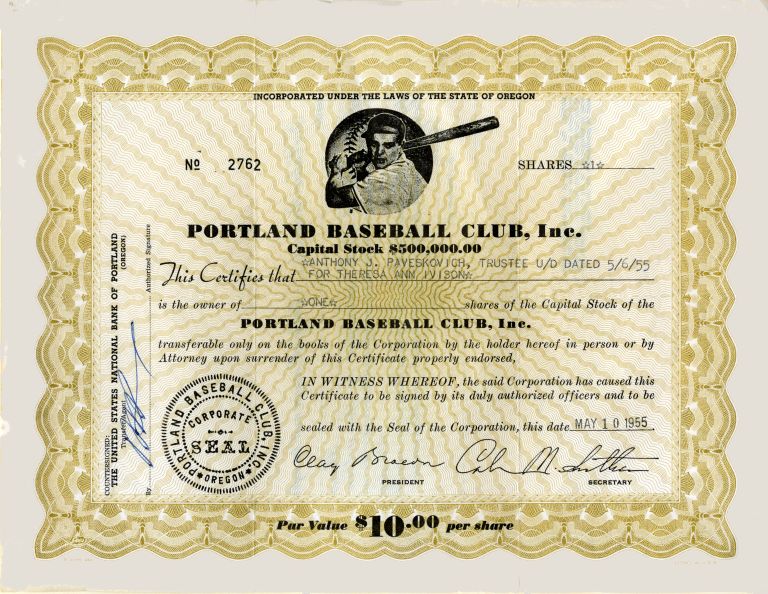 Certificate
In 1948 the team finish fifth, followed by a sixth place finish in 1949. The 1949 season began the integration of the Pacific Coast League as Frankie Austin and Luis Marques became Beavers. Beginning with the 1950 season the Beavers finished fourth for four straight years. Clay Hopper, who had been Jackie Robinson's manager when he played for the Montreal Royals in 1946, was named the team's manager in 1952. This year also marked the first year the Pacific Coast League, and the Portland Beavers, were classified by the National Association of Professional Baseball Leagues as an "Open League." The open league was a step above AAA, and was an attempted by the Pacific Coast League to be considered the third major league. Plans for a new ballpark were announced by the team in 1953. Originally the team planned to build a new stadium at 82nd & Holgate in Southeast Portland. Due to the Korean War, among other issues, the stadium never came to fruition. In 1954 the team dropped again to the bottom of the league. After the 1954 season the team went up for sale via public stock, which resulted in 2,400 new owners for the 1955 season. With the change the Beavers rose to fifth place, only nine games back of first. In 1956, the Beavers left Vaughn Street Park to move into 25,000-seat Multnomah Stadium, eventually renamed Civic Stadium. Throughout most of the 1960s, the Beavers were the AAA affiliate of the American League Cleveland Indians, nurturing such future stars as "Sudden" Sam McDowell, Lou "Mad Dog" Piniella, and Luis "El Gigante" Tiant. Later major league affiliations included Minnesota and Philadelphia. After 1972, in which the Beavers drew fewer than 92,000 fans for the entire season, the team left Portland for Spokane. The Class A Portland Mavericks filled the void left by the departure of the Beavers. The Mavericks played in the short-season Northwest League, with a schedule running from mid-June through August. They won four division titles in their five year history (second place in 1974), but never won the league championship. In 1973, the Beavers moved to Spokane. History from Wikipedia, Encyberpedia and OldCompany.com (old stock certificate research service)

Postcard from the Oregon Yacht Club, "The Oaks", Portland, Oregon