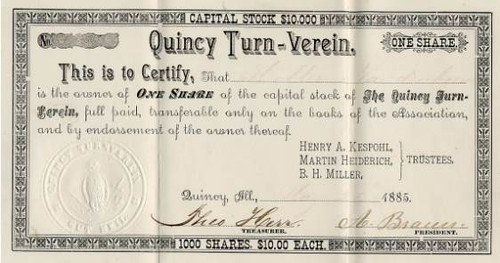 Beautifully engraved certificate from Quincy Turn-Verein issued in 1885. This historic document has an ornate border around it. This item is hand signed by the Company's President and Treasurer and is over 119 years old. TURNVEREIN MOVEMENT. The turnverein movement was brought to the United States by Forty-Eighters,qv political refugees from Germany who were ardent practitioners of the gymnastic system begun in 1811 by Friedrich Ludwig Jahn. The term Turnverein denotes a gymnastic or athletic club; in Texas the term has generally been written Turn Verein. Turnvereins were established in Cincinnati and New York City in 1848, and in Texas three years later. The American Turnerbund (gymnastic league), now called American Turners, was formed in 1850. This federation, which at one time enrolled over 30,000 members, espoused a variety of controversial causes such as abolition and socialism until 1880, when they made introducing physical training in all American schools their primary goal. In addition to promoting gymnastics and calisthenics, Turners contributed to the standardization and popularization of bowling nationwide (see NINEPIN BOWLING). Texas turnvereins were established in Galveston (1851), Houston (1854), New Braunfels (1855), San Antonio (1855), and Comfort (1860). The German founders of these clubs included many original settlers of New Braunfels and Comfort. Civic leaders, teachers, artists, and scientists, such as Ferdinand Jacob Lindheimer, Friedrich Hermann Seele,qv and Peter Ingenhuett, helped form turnvereins. When in 1855 the national Turner newspaper published a series of strong antislavery articles, the Houston verein withdrew from the bund, and Galveston apparently followed. Though Texas Turners were divided on the issues of slavery and secession, when the Civil Warqv erupted, men from all four clubs volunteered for the South, and many were killed. Their clubs survived, however. During the postbellum period few if any Texas turnvereins joined with the national bund or endorsed its programs and politics; most focused instead on gymnastics and local interests. Since 1854 there have been twenty-eight turnvereins in twenty-one Texas communities, some with over 600 members. As soon as possible after formation, all acquired halls spacious enough to accommodate gymnastics. Whether simple frame structures or elaborate masonry complexes housing bowling alleys, ballrooms, theatres, and saloons, nineteenth-century Texas Turner halls were often centers of community life. Financing came primarily from dues and rental and sale of property, although tax incentives and rent-free buildings for community service projects were sometimes provided. In 1984 six Texas turnvereins remained active: Boerne, Comfort, Fredericksburg, Houston, La BahÃ­a, and San Antonio. Turners, however, have contributed much more than buildings. Though begun as gymnastic societies, most vereins also had social, intellectual, and benevolent goals. Houston's Turners cared for the sick and needy, established schools, and provided dramatic and musical entertainment for the public. Turners organized elaborate Fourth of July celebrations for their towns or counties and made turnverein parks, gymnasiums, and bowling alleys available for general use. Most significant, Turners founded several of the first volunteer fire departments and provided fire protection for years. The Houston and Fredericksburg clubs received citations for this work. The 1870s were the heyday of turnvereins in Texas, with fifteen new clubs organized, both by second-generation German Texans and by Turners from other states. Eight were incorporated by the legislature and authorized to sell stocks. Turners from Austin, San Antonio, New Braunfels, and High Hill attended a Turnfest (gymnastic contest) and convention in San Antonio in 1871. They discussed affiliation with the national bund, but instead formed a "Texas League." Annual state Turnfeste were held until 1877, when the larger Texanischer Turnerbund was organized for all Texas clubs. Gymnasts from Austin, Brenham, Galveston, Fredericksburg, Houston, New Braunfels, and San Antonio attended their 1878 Bundesturnfest in Houston. Despite this growth, gymnastics never became popular in Texas, and as founding Turner gymnasts grew older, there were none to replace them. Beginning in the 1880s, those turnvereins whose primary function was gymnastics began to disband or merge with other organizations or change their function and become mere dance hall sponsors as at La BahÃ­a. Bowling became a major focus, and probably the salvation, of other vereins. The Texas Turnverein Bowling League was established in 1913, and in 1914 the Houston Turnverein helped organize the Texas Ten Pin League, to which they still belong. At present, five of the six Texas turnvereins own bowling alleys and sponsor bowling leagues. Like turnvereins nationwide, Texas clubs were further diminished by assimilation and two world wars. Those clubs that survived were essential to their communities, providing recreational and social services not available elsewhere. The most successful Texas turnverein in 1984 was the one at Boerne, with over 600 members in a town of 3,229. In 1994 the Boerne club had 300 to 400 active members. Owning both club building and bowling alley, the club provides bowling facilities to community, school, and special education classes. Though the Boerne Turn Verein is exceptional today, during the nineteenth century all Texas Turner clubs contributed much to the life of their communities. History from "TURNVEREIN MOVEMENT." The Handbook of Texas Online.