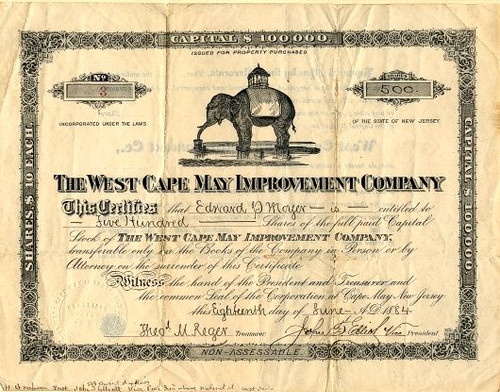 Beautiful RARE certificate #3 from the West Cape May Improvement Company issued in 1884. This historic document has an ornate border around it with a vignette of the Light of Asia, affectionately known as Old Jumbo. This item has the signatures of the Company's V.President, John Elliott and Treasurer, Theodore M. Reger and is over 134 years old. The Certificate was issued to Edward P. Moyer. Worn on folds. 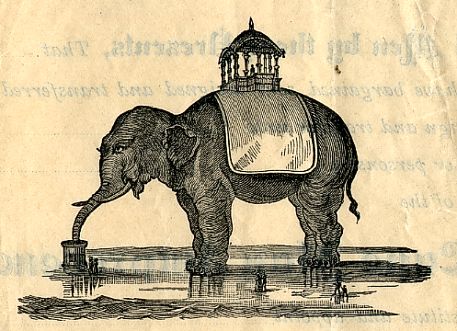 Certificate Vignette
Cape May, New Jersey is America's Oldest Seashore Resort and a National Historic Landmark. The West Cape May Improvement Company was founded in 1884 to sell lots and build streets in the area near the long lost Mount Vernon Hotel. South Cape May was a borough that existed in Cape May County, New Jersey, United States, from 1894 to 1945. First settled in 1840, it contained a Lucy-type elephant named Light of Asia. The Light of Asia was a 40-foot wooden Elephant built on land owned by the Theodore Reger of Philadelphia and built under the supervision of James Bradley, a builder of the area. Work began on the frame in May of 1884 from plans drawn by architect N.H. Culber, also of Philadelphia. The structure was 40 feet, 10 inches tall, or 58 feet, 2 inches to the top of the howdah. The howdah itself was 11 feet long and the Elephant's trunk, which terminated in a large barrel on the ground, was 21 feet long. A wooden platform on which the Elephant was based was 834 feet, 9 inches long and 40 feet wide. It was estimated that a million pieces of wood were used in the construction, plus 250 kegs of nails and six tons of bolts. The tinsmith supplied 13,400 square feet of tin to cover the framework. Entrance was made through the hind legs and a spiral staircase led to a small concession stand inside. Refreshments were also sold from stands in the front legs of the structure. In spite of the fact that hundreds of people arrived by excursion trains and boats to Cape May to see the Light of Asia. It was never a financial success. Concession and admittance fees never covered the $18,000 cost of construction. Samuel E. Ewing of Cape May was given a contract to tear it down. The last remains, according to newspaper reports of the day, were cremated on May 26, 1900. South Cape May was badly wrecked by the 1944 Great Atlantic Hurricane, which hit in September of that year. After the hurricane, the borough was dissolved as of April 30, 1945, and returned to Lower Township. The remaining land not underwater is part of a bird sanctuary. History from Wikipedia. Lucy the Elephant is a six-story elephant-shaped architectural folly constructed of wood and tin sheeting in 1882 by James V. Lafferty in Margate City, New Jersey, two miles (3.2 km) south of Atlantic City, in an effort to sell real estate and attract tourism. The idea of an animal-shaped building was innovative, and in 1882 the U.S. Patent Office granted Lafferty a patent giving him the exclusive right to make, use or sell animal-shaped buildings for seventeen years. Lucy is the oldest example of zoomorphic architecture, and the largest elephant in the world. Lafferty, in fact, constructed several elephant-shaped buildings. The first was built at South Atlantic City, which later changed its name to Margate. This structure, whose original name was "Elephant Bazaar", was dubbed "Lucy the Elephant" in 1900. She stands 65 feet (19.7 m) high, 60 feet (18.3 m) long, and 18 feet (5.5 m) wide, weighs about 90 tons, and is made of nearly one million pieces of wood. She was sold to new owners in 1887. The second to be built, the Elephantine Colossus, also known as the Elephant Hotel was built at Coney Island amusement park in Brooklyn, New York. It was 12 stories (122 feet, 37.2 m) tall, with legs 60 feet in circumference. It held a cigar store in one leg and a dioramic display in another, hotel rooms within the elephant proper, and an observation area at the top with panoramic sea views. The Elephantine Colossus was destroyed by fire in 1896. The third, officially the Light of Asia, but dubbed Old Jumbo by locals, was built at Cape May in 1884. Only Lucy survived into the next century. Over the years, Lucy had served as a restaurant, business office, cottage, and tavern (the last closed by Prohibition). A popular story is that Lucy once housed a hotel but this is untrue. Lucy had fallen into disrepair by the 1960s and was scheduled for demolition. She was moved and refurbished as a result of a "Save Lucy" campaign in 1970 and received designation as a National Historic Landmark in 1976. According to Dick DeBartolo on the Daily Giz Wiz podcast, Mad Magazine publisher William M. Gaines started the "Save Lucy" campaign after seeing the building in such a state of disrepair. Lucy was struck by lightning for the first time in Spring 2006; the tips of the tusks became blackened. Lucy's head shape identifies her as an Asian Elephant. She has tusks, which is a feature found only in male Asian elephants. In the first few years following her construction she was referred to as a male, however she is now generally considered to be female. In November 2006, Lucy was prominently featured in an advertisement for Proformance Insurance. History from Wikipedia and OldCompanyResearch.com (old stock certificate research service).