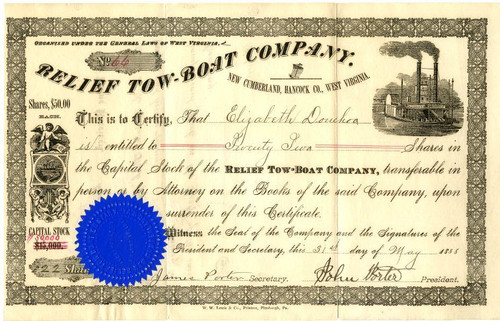 Beautifully printed certificate from the Relief Tow-Boat Company issued in 1888.This historic document has an ornate border around it with a vignette of a Steamboat vignette. This item has the signatures of the Company's President, John Porter and Secretary, James Porter. This is the first time we have seen this certificate. 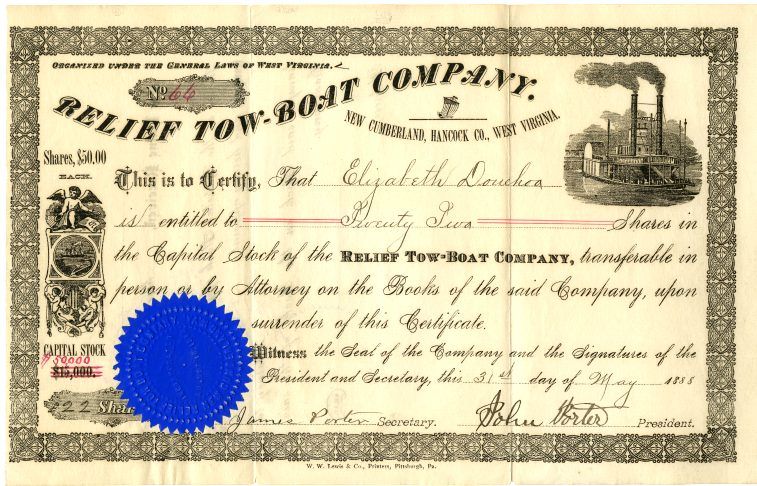 Certificate
History of West Virginia, Old and New - Volume 2 - Page 593 James Morton Callahan · 1923 Captain John Porter A MOST unusual and distinguished figure in the busi his mark. He was a familiar figure in the river trade and ness and industrial affairs of the Upper Ohio Valley was a leader in West Virginia politics. He served one term was the late Captain John Porter, who died February as sheriff of Hancock County and two terms in the West Virginia Legislature, of which one of his four sons, J. Nessly did in the world of affairs nothing better could be said than Porter, is now a member to repeat the words of an editorial in the Evening Review "The Ohio Valley has suffered a great loss in the death of East Liverpool of Mr. Porter. The East Liverpool District today joins with Hancock, Captain Porter was born at Martins Ferry, Ohio, August Brooke and Ohio counties, West Virginia, and, in fact, the 7, 1838, son of Moses Porter. It was in the early period of entire Ohio Valley, in mourning the death of Captain John his life that he had his experience as an Ohio River man. Porter, of Kenilworth, West Virginia, originator as well as He operated a line of steamboats and barges on the Ohio pioneer in the paving brick industry in the United States. and Mississippi between Pittsburgh and New Orleans. He At his home in the West Virginia town he died last night was owner of the steamboat which bore his name and which at the age of eighty-three, after a successful career in business in 1877 came up the river from Memphis with several of the and public life. None of the towns along "Wherever paving brick is used and there is not believed the way would permit the boat to land so as to secure medical to be even a hamlet in the broad expanse of America in attention, and the ill-fated barge had its ending near Galwhich vitrified fire clay is not used for street purposes the lipolis, where the disease raged all winter, six persons dying name of Captain Porter is honored, for he is the oldest paving from its effects. When he became a manufacturer of brick brick manufacturer in the United States, and it was due to the old hand processes were still in use, and it is said that he his efforts that brick was adopted for this purpose by munici and his helpers could make about thirty-five hundred brick palities. The first brick pave"Captain Porter's success in the business world should ment laid in any city in America was at Charleston, West encourage ambitious men of the present and future genera Virginia, where building brick was laid on Summers Street tions. Discouragement on all sides--even ridicule-proved in 1871.' Although these brick were not so satisfactory as the no obstacle when his experiments in the manufacture of brick later vitrified paving brick, they served their purpose for convinced him that vitrified fire clay was adaptable for street thirty-eight years, and some of these brick are still preserved paving. He introduced paving brick after members of coun in the state museum at Charleston. This brick used at cils in cities laughed at the idea. But when his arguments Charleston was manufactured and sold by Captain Porter, failed to win over skeptics he adopted the novel plan of and he always took a great deal of justifiable pride in that shipping a nominal number of brick to cities to be used in conception. paving a portion of a street for testing purposes. And after On December 7, 1870, Captain Porter married Miss Carrie each test came a substantial order. Mahan. They celebrated their golden wedding anniversary "To Captain Porter belongs the credit for manufacturing a little over a year before the death of Captain Porter, and the brick used for the first paved street in Wheeling. This Mrs. Porter survives him with four sons and one daughter: was in the early '80s. In 1884 he introduced paving brick Fred G., James Bennett, J. Nessly and Sidney C. Porter, in Ohio, his product being used to improve a section of Third Street in the City of Steubenville. And so satisfactory did and the daughter is Mrs. Fred B. Lawrence. Captain Porter the vitrified fire clay prove that twenty-six years later-in was also survived by thirteen grandchildren. 1910-authorities of Steubenville forwarded a letter, pointing In politics Captain Porter was a stanch republican, his out that no repairs had been necessary to the portion of the first vote being cast for Abraham Lincoln. His service as thoroughfare paved with brick from his plan except when sheriff of Hancock County was for the term 1891-95. He the street was torn up to lay pipe or street car lines. He was twice elected a member of the West Virginia House of "Not only in commercial affairs did Captain Porter make Delegates, serving his first term beginning in 1911. History from Wikipedia and OldCompany.com (old stock certificate research service)