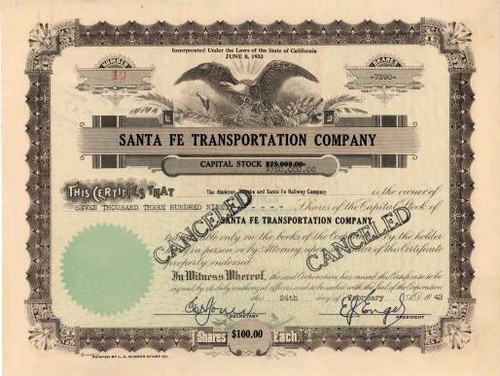 Beautifully engraved certificate from the Santa Fe Transportation Company issued in 1935. This historic document has an ornate border around it with a vignette of an eagle with a shield. This item is hand signed by the Company's President and Secretary and is over 77 years old. The Santa Fe Transportation Co. was involved in conducting automobile tours in New Mexico and Arizona, especially to Indian sites, in conjunction with the Fred Harvey Co. and ultimately became part of the Santa Fe Pacific Corporation. BNSF was created on September 22, 1995, from the merger of Burlington Northern Inc. (parent company of Burlington Northern Railroad) and Santa Fe Pacific Corporation (parent company of the Atchison, Topeka and Santa Fe Railway). The company employs more than 40,000 people. Headquartered in Fort Worth, Texas, Burlington Northern Santa Fe Corporation (BNSF), through its subsidiary The Burlington Northern and Santa Fe Railway Company, operates one of the largest railroad networks in North America, with 33,500 route miles covering 28 states and two Canadian provinces. This vast network covers the western two-thirds of the United States, stretching from major Pacific Northwest and Southern California ports to the Midwest, Southeast and Southwest, and from the Gulf of Mexico to Canada.