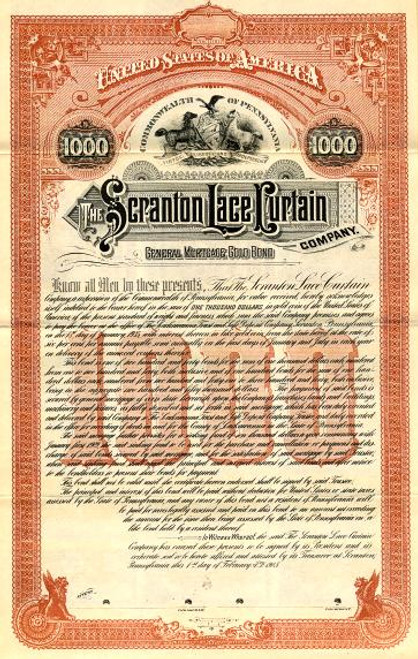 Beautifully engraved RARE Specimen Gold Bond from the Scranton Lace Curtain Company dated in 1905. This historic document was printed by the Franklin Lee Banknote Company and has an ornate border around it with a vignette of the State Seal. This item is over 101 years old. This is the only certificate we have seen from this company and we only have one. 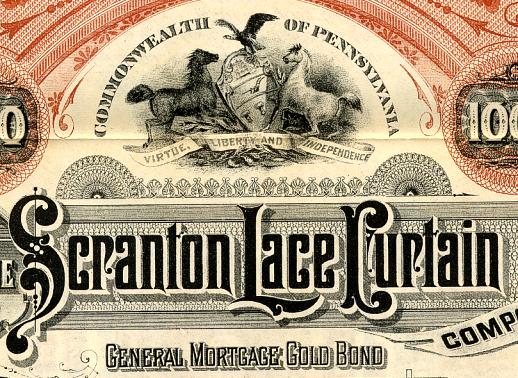 Certificate Vignette
The Scranton Lace Company, whose operations spanned two centuries of American history, ended production in 2002. During its heyday in the early 20th century, Scranton Lace employed over 1,400 people and was the world's largest producer of Nottingham lace. It had bowling alleys, a gymnasium, a barber, a fully staffed infirmary, and owned its own coal mine and cotton field. Founded in 1897 in Scranton, PA, the company used looms that were made in Nottingham, England, stood two and a half stories tall, were over 50 feet long, and weighed over 20 tons. During World War II, the company expanded its production line to include mosquito and camouflage netting, bomb parachutes, and tarpaulins. After the war, the company returned to producing cotton yarn, vinyl shower curtains, and textile laminates for umbrellas, patio furniture, and pool liners. In recent years, the number of employees dwindled to around 50 people, with annual sales averaging $6 million. As mechanized looms replace manual ones, Scranton Lace joins the ranks of craft-style textile manufacturers shutting their doors. About Specimens Specimen Certificates are actual certificates that have never been issued. They were usually kept by the printers in their permanent archives as their only example of a particular certificate. Sometimes you will see a hand stamp on the certificate that says "Do not remove from file". Specimens were also used to show prospective clients different types of certificate designs that were available. Specimen certificates are usually much scarcer than issued certificates. In fact, many times they are the only way to get a certificate for a particular company because the issued certificates were redeemed and destroyed. In a few instances, Specimen certificates we made for a company but were never used because a different design was chosen by the company. These certificates are normally stamped "Specimen" or they have small holes spelling the word specimen. Most of the time they don't have a serial number, or they have a serial number of 00000. This is an exciting sector of the hobby that grown in popularity and realized nice appreciation in value over the past several years.