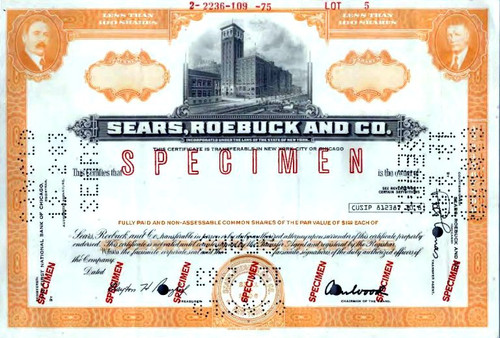 Beautifully engraved specimen certificate from Sears, Roebuck and Co printed in 1975. This historic document was printed by American Bank Note Company and has an ornate border around it with a vignette of the Sears Roebuck building, and portraits of the company's founders Wichard W. Sears, Alvah C. Roebuck. This item has the printed signatures of the Company's Chairman and Treasurer and Secretary and is over 44 years old. 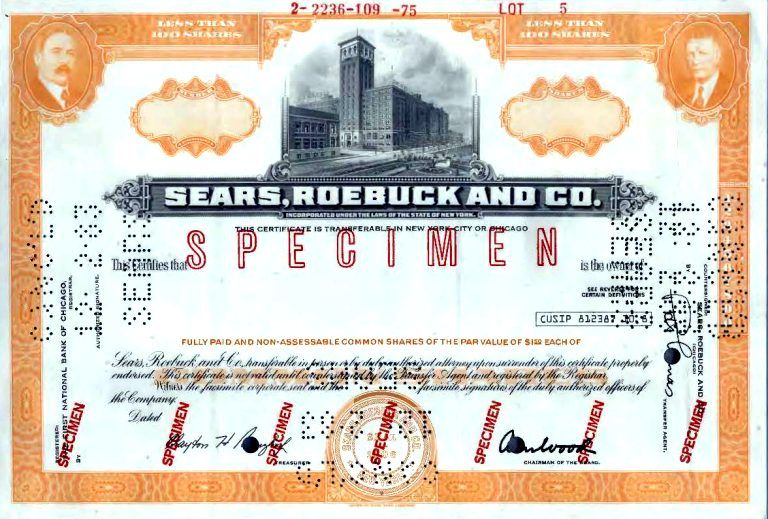 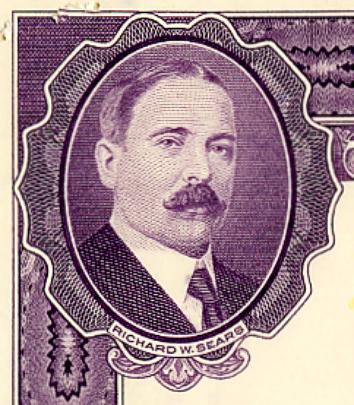 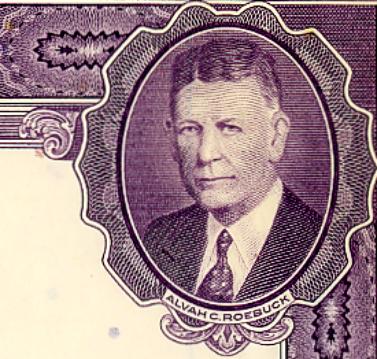 Certificate Vignette
Sears, Roebuck and Co. is a broadline retailer with significant service and credit businesses. In 2001, the company's annual revenue was more than $41 billion. The company offers its wide range of apparel, home and automotive products and services to families in the U.S. through Sears stores nationwide, including approximately 870 full-line stores. Sears History 1886 -- Richard Sears starts selling watches to supplement his income as station agent at North Redwood, Minn. 1887 -- Sears settles in the company's first Chicago location and hires a watchmaker named Alvah C. Roebuck. 1888 -- Date of the earliest catalog featuring only watches and jewelry. 1893 -- Corporate name becomes Sears, Roebuck and Co. 1896 -- First large general catalog. 1911 -- Sears establishes testing laboratory. 1916 -- Savings and Profit Sharing Fund of Sears Employees is established. 1925 -- First Sears retail store opens in catalog center on Chicago's west side. 1927 -- Sears launches the Craftsman® and Kenmore® brands. 1931 -- Allstate Insurance Co. established. 1945 -- Sears sales exceed $1 billion. 1953 -- Simpsons-Sears, Ltd. established in Canada. 1973 -- Sears moves its national headquarters to Sears Tower. 1981 -- Sears acquires Dean Witter Reynolds Organization and Coldwell, Banker & Company. 1985 -- Discover Card introduced nationally. 1986 -- Sears celebrates its 100th anniversary. 1993 -- Sears sells (IPO) 20 percent of Dean Witter shares to public, spins-off remaining shares to shareholders. New company called Dean Witter, Discover & Co. 1993 -- Sears sells 20 percent of Allstate to public. 1993 -- Sears sells Coldwell Banker Residential Services and Sears Mortgage Banking Group. 1993 -- Sears introduces popular "Come see the softer side of Sears" advertising campaign. 1995 -- Sears appoints Arthur C. Martinez as Chairman of the Board and Chief Executive Officer. 1996 -- Sears launches the KidVantage Program. 1997 -- Sears opens The Great Indoors stores. 1997 -- Sears makes Craftsman® tools available on-line. 1997 -- Sears becomes a founding sponsor of the Women's National Basketball Association. 1998 -- Sears launches Wishbook.com. 1999 -- Sears introduces "The Good Life at a Great Price" advertising campaign. 1999 -- Sears launches Sears.com. 2000 -- Sears appoints Alan Lacy as Chairman of the Board and Chief Executive Officer. 2001 -- Sears returns to downtown Chicago, opening a new flagship store on State Street. Sears had the largest domestic revenue of any retailer in the United States until October 1989, when Walmart surpassed it. In 2018, Sears was the 31st-largest retailer in the United States. After several years of declining sales, its parent company filed for Chapter 11 bankruptcy on October 15, 2018.Sears announced on January 16, 2019 it had won its bankruptcy auction and would shrink and remain open with about 400 stores. History from Wikipedia and OldCompany.com (old stock certificate research service) About Specimens Specimen Certificates are actual certificates that have never been issued. They were usually kept by the printers in their permanent archives as their only example of a particular certificate. Sometimes you will see a hand stamp on the certificate that says "Do not remove from file". Specimens were also used to show prospective clients different types of certificate designs that were available. Specimen certificates are usually much scarcer than issued certificates. In fact, many times they are the only way to get a certificate for a particular company because the issued certificates were redeemed and destroyed. In a few instances, Specimen certificates we made for a company but were never used because a different design was chosen by the company. These certificates are normally stamped "Specimen" or they have small holes spelling the word specimen. Most of the time they don't have a serial number, or they have a serial number of 00000. This is an exciting sector of the hobby that grown in popularity over the past several years.