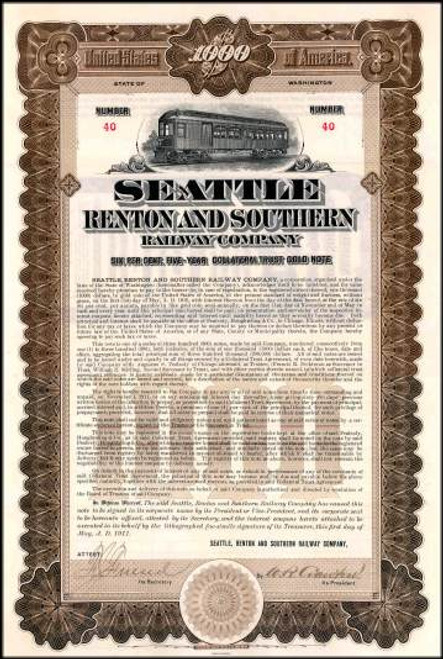 Beautifully engraved SCARCE certificate from the Seattle Renton and Southern Railway Company issued in 1911. This historic document was printed by the Western Banknote Company and has an ornate border around it with a vignette of a train car. This item is hand signed by the Company's President ( W. R. Crawford ) and Secretary and is over 92 years old.

Certificate Vignette
The Seattle Renton and Southern Railway built the first interurban railroad in King County. The Railway helped begin the development of the agricultural Rainier Valley. The line was begun by J. K. Edmiston and extended by W. J. Grambs, Frank Osgood (1852-1934), and W. R. Crawford. In 1912, its name was changed to the Seattle & Rainier Valley Railway. The line suffered from safety problems, poor financing, and less than adequate management. The City of Seattle attempted to buy it in 1914 and finally (in 1936) revoked its franchise. W. R. Crawford purchased the Railway in 1907. Crawford introduced the region's first true interurban railway cars and self-propelled electric railroad cars. These were considerably larger than conventional streetcars. The Seattle Renton and Southern Railway Company declared bankruptcy in 1912 and was reorganized as the Seattle and Rainier Valley Railway, but the service did not improve with the new organization.