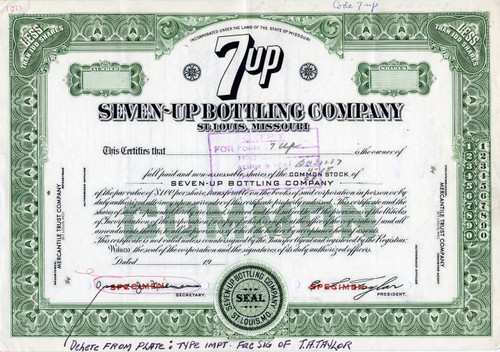 Beautifully engraved RARE Specimen Mock Up Specimen Proof Certificate from the Seven-Up Bottling Company - St. Louis, Missouri. This historic document was printed by the Republic Banknote Company, Pittsburgh and has an ornate border around it with a vignette of the famous 7up Logo. This item has the printed signatures of the Company's President, E. L. Taylor and Secretary, Oscar Neiman. This came our of the archives of the Republic Banknote Company who had made some notations on this certificate. 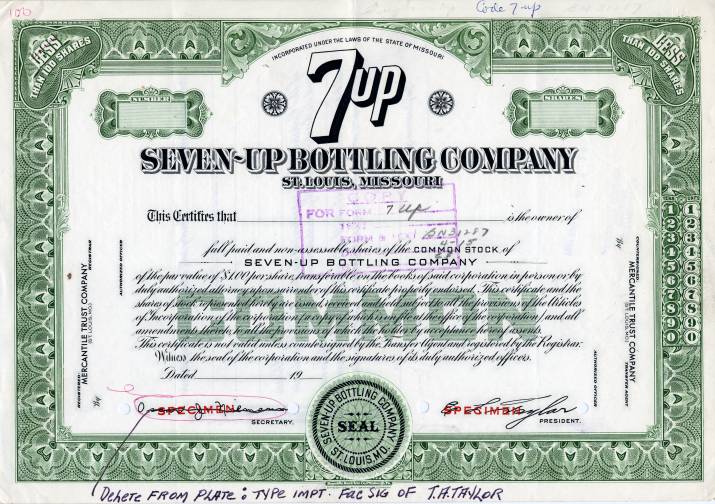 Certificate
7 Up was created by Charles Leiper Grigg who launched his St. Louis-based company The Howdy Corporation in 1920. Grigg came up with the formula for a lemon-lime soft drink in 1929. The product, originally named "Bib-Label Lithiated Lemon-Lime Soda", was launched two weeks before the Wall Street Crash of 1929. The product's name was soon changed to 7 Up. 7 Up, as its first name suggests, originally contained lithium citrate, a mood-stabilizing drug. It was one of a number of patent medicine products popular in the late-19th and early-20th centuries; they made claims similar to today's health foods. The Great Depression was just the beginning of the business challenges the product would face. In its early years, there were around 600 lemon-lime beverage brands being sold in the US. 7 Up was able to survive and become the market leader in the category by being one of the first to be nationally distributed as well as being marketed as more healthy than other soft drinks. The success of 7 Up led Grigg to rename his company to The Seven Up Company in 1936. Lithium citrate was removed from 7 Up's formula in 1950. After establishing the category as more than a niche, major competitors set their sights on it such as The Coca-Cola Company with its Sprite brand introduced in 1961. Sprite would not challenge 7 Up's position seriously until the 1980s when Coke forced its major bottlers then distributing 7 Up to drop the beverage in deference to Sprite. 7 Up challenged Coke's actions in court as anti-competitive, a challenge they eventually lost. Philip Morris acquired The Seven Up Company in June 1978. Philip Morris sold the brand's U.S. operations in 1986 to a private investment group, which merged with Dr Pepper Company and established Dallas, Texas as the headquarters of the combined company. A can of 7-Up.7 Up became dependent on Pepsi's bottlers for distribution during the 1990s, until PepsiCo launched its own serious entrant in the category with Sierra Mist in 2000. PepsiCo then adopted the previous Coca-Cola tactic and forced its bottlers to give up 7 Up for Sierra Mist, which most did by 2003. The result is that in the United States, DPSU does not have a network of bottlers and distributors, so some of their products are frequently bottled under contract by independent Coca-Cola or Pepsi bottlers, though in some areas independent distributors exist, either by Cadbury-Schweppes, or by individual independent bottling plants such as Vineland Syrup of Vineland, New Jersey[1] and Polar Beverages of Worcester, Massachusetts. These bottlers often do not distribute their products much beyond major supermarket chains, so 7 Up can be difficult to find in smaller stores and vending machines. In an effort to align their brands and build a better "route to market", in 2006 Cadbury Schweppes Americas Beverage acquired most of the independent 7 Up bottlers in the U.S and created the Cadbury Schweppes Bottling Group. In 1998, in the first formula change since lithium's removal, 7 Up was flavor-enhanced, without changing the sugar content or carbonation level. History from Wikipedia and OldCompanyResearch.com.