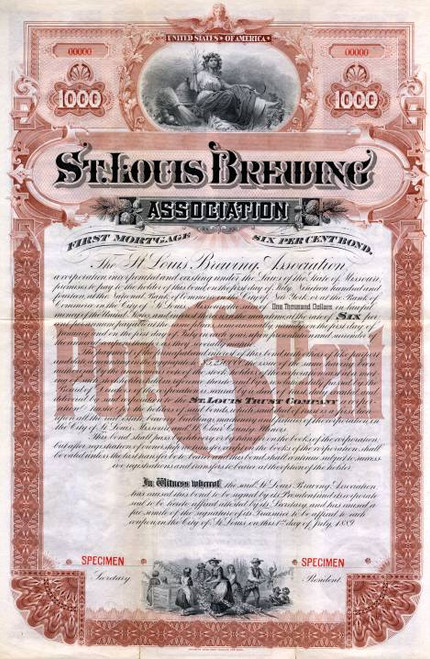 Beautiful $1000 Specimen Bond Certificate from the St. Louis Brewing Association printed in 1889. This historic document was printed by the American Bank Note Company and has an ornate border around it with a vignettes of a reclining woman (on top) and farmers (on bottom). This item is over 125 years old. 50 coupons attached on right not shown in scan. 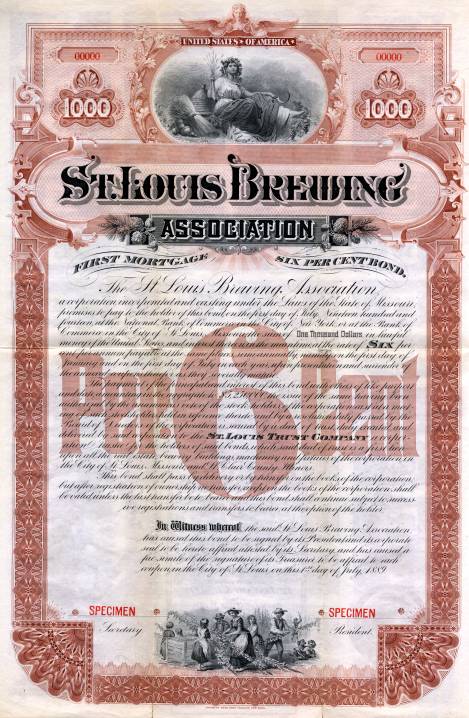 Certificate
Poor's Manual of Industrials; Manufacturing, Mining and Miscellaneous Companies 1911 ST. LOUIS BREWERIES, LTD-Incorporated Dec. 6, 1889, under the laws of England, as a holding company of all of the stock (except thirteen shares) of the St. Louis Brewing Association, which was incorporated in June, 1889, under the laws of Missouri and acquired breweries in St. Louis, M0. The entire capital stock ($5,088,624) of the St. Louis Brewing Association is held in trust for stock issued in London of the St. Louis Breweries, Ltd. Owns and operates ten breweries and one ice cold storage plant at St. Louis, Mo. Annual capacity, 850,000 bbis.; production, 750,000 bhls. per annum.