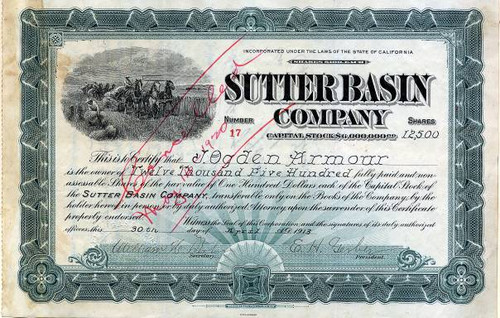 Beautiful certificate #16 from the <font color="#0000FF">Sutter Basin Company</font> issued in 1913. This historic document was printed by the Western Banknote Company and has an ornate border around it with a vignette of a group of farmers harvesting a field. This item has the signatures of the Company’s President, and Secretary. the certificate was issued to J. Ogden Armour and signed by him on the back. This item is over 109 years old.

Jonathan Ogden Armour (November 11, 1863 – August 16, 1927) was an American meatpacking magnate in Chicago, and owner and president of Armour and Company. During his tenure as president, Armour & Co. expanded nationwide and overseas, growing from a small regional meatpacker to one of the largest food products companies in the United States.

J. Ogden Armour was born in Milwaukee, Wisconsin to Philip D. and Malvina B. Armour. He was the couple's first child; a brother, Philip D. Armour, Jr., followed. The year he was born, his father became a partner in the meatpacking firm of Plakington & Armour. The family moved to Chicago in 1865. In 1867, Armour's father decided to move the company's primary meatpacking operations from Milwaukee to Chicago. His business partner disagreed, and sold his interest in the company to the senior Armour. The firm moved, and changed its name to Armour & Co.

J. Ogden Armour attended Yale University, but dropped out in his senior year in order to assist his father with the family company. He became a partner in the firm in 1884.

Armour met the former Lola Sheldon (she later used the name "Lolita") in 1891. They married in Mexico in 1892, and had one daughter, also named Lolita.

As his father's health declined, J. Ogden Armour took over more and more responsibility for the direction of Armour & Co. His younger brother, Philip Jr., died in 1900. J. Ogden Armour took over as company president in 1901. During his tenure, sales skyrocketed from $200 million to $1 billion. In July 1904, the year after Armour took over the company, the Amalgamated Meat Cutters struck all meatpackers in Chicago. Armour and the other employers broke the union by hiring thousands of unemployed African American strikebreakers. The hiring of the strikebreakers provoked a riot involving 4,000 union members and their families on August 19, 1904. The strike collapsed in mid-September. Social reformer Jane Addams met personally with Armour to secure a contract which helped the union survive.

To finance the company's growth during World War I, Armour sold $60 million in bonds to the public in 1917. These bonds were converted to stock in 1919, making Armour & Co. one of the first publicly-traded meatpacking firms.

In the post-war slump, Armour & Co. sales collapsed and the company went $144 million in debt. Armour lost most of his family fortune—at $100 million (about $1 billion in 2007 dollars), then the second-largest in the world—in the downturn. The company lost $125 million between 1919 and 1921. Armour, owner of $100 million in stock, suffered the most. During the worst period, Armour lost a million dollars a day for 130 days. J. Ogden Armour was unable to reinvigorate the company, and was ousted as president in 1923. His successor was F. Edson White.

J. Ogden Armour also owned the Kansas City Power & Light Company and the Metropolitan Street Railway, also of Kansas City. He sold his interests in both companies in 1923. He was also a significant investor in the Chicago, Milwaukee, and St. Paul Railroad and the Illinois Central Railroad.

He was a co-owner of the Armour Grain Company. During a market panic on the Chicago Board of Trade in August 1914, he helped avoid a spike in wheat prices by selling hundreds of thousands of bushels of grain.

In 1901, the same year he took over Armour & Co., Armour donated $1 million to the Armour Institute, the college his father had founded. Additionally, he was a founding director of the South Shore Country Club in Chicago.

In 1909 he was silent partner for Frederick Gilmer Bonfils and Harry Heye Tammen in the purchase of the Kansas City Post.

Armour played a role in aviation history when he bankrolled the pioneering transcontinental flight of Cal Rodgers. Armour used the flight to promote the introduction of a grape-flavored soda called Vin Fiz. The plane, and its accompanying railroad cars, were painted with Vin Fiz logos.

Armour built an Italian-style estate on 1,200 acres (4.9 km) of farmland at Mellody Farms in Lake Forest, Illinois, in 1908. The estate was designed for his daughter, who was crippled as a child. This former estate is now part of the campus of Lake Forest Academy.

J. Ogden Armour wrote two books: The Packers, the Private Car Lines, and the People in 1906 and Business Problems of the War in 1917.

Armour was the inspiration for one of the meatpacking plant owners in Upton Sinclair's classic novel, The Jungle. The 1904 strike against Armour & Co. figures in the novel's plot.

Armour and Mellody Farms appear (under pseudonyms) in Arthur Meeker's 1949 social satire Prairie Avenue. The novel is about the foibles of wealthy Chicagoans and their move away from Chicago's South Side.

Armour retired to California. In the summer of 1927, he traveled to London, England, and fell ill with typhoid and then pneumonia. As his condition worsened, he was attended by Lord Dawson of Penn, personal physician to King George V. Armour died of heart failure at 4:30 p.m. London time on August 16, 1927. He had less than $25,000 in cash in his accounts, although his stock holdings in the Universal Oil Company were estimated at $3 million.

"I lost money so fast, I didn't think it was possible."

"I have had some of the finest friendships any man ever had, although mine probably have been the most expensive friends anyone ever enjoyed. My friends have cost me a great deal of money, yet there is not one of them whom I can hate for it."

"I don't suppose I shall ever be happy. Perhaps no one ever is. But the thing that would make me happiest just now would be to know that I could get roaring drunk and wander about the loop for two days without anyone paying any attention to me."

Sutter Basin Company as reported in 1924:

Organized under the laws of California Apr. 29, 1913. Owns the fee to 50,087 acres of land in the Sacramento Valley, in Sutter County, Cal., in what is known as the Sutter Basin, lying between the Feather and Sacramento Rivers.

Secured by First Mortgage on all property.

Deposited as Security for Notes.

Secured by a mortgage covering the company's holdings of 45,654 acres of land lying within Reclamation District No. 1500 and 9,468 acres within the Sutter By-Pass (which is an artificial channel created to carry off surplus overflow waters) in Sutter County, California, at the confluence of the Sacramento and Feather Rivers, approximately 21 miles above the city of Sacramento. The 45,- 654 acres are completely reclaimed in accordance with the general Flood Control Plan adopted by the United States Government and the State of California. Additionally secured by pledge of all of the stock of the Sutter Basin Improvement Company, which owns approximately .268 acres lying without District No. 1500 but adjacent thereto, and all of the stock of Sutter Basin Company, of which approximately 60% is owned by Mr. J. Ogden Armour and members of his Immediate family, the remaining 40% being owned by his associates In the management of the Sutter Basin Company.

The mortgage provides for the release of lands based upon a scale of payments to the trustee sufficient to provide substantialry 50% in excess of the entire amount of the bonded debt. If land is sold, the entire amount necessary to release shall be deposited with the trustee to be used either for the retirement of the principal of bonds, or for the acquirement of other real property within District No. 1500, which must be subjected to the lien of this mortgage.

The 55,122 acres owned by the company have been appraised by a qualified, disinterested appraiser at a total valuation of approximately $17,000,000. This figure does not give consideration to the lands of Sutter Basin Improvement Company. Sutter Basin Company has no other mortgage indebtedness, and the present mortgage Is a first Hen on the lands described, except only In respect to a lien represented by an assessment for reclamation purposes against all lands lying within the District. Sutter Basin Company's share of this assessment amounts to approximately $3,850,000. The entire amount of the assessment, plus similar assessments against other lands, not owned by this company lying within the District, has been funded into an Issue of approximately $5,000,000 District No. 1500 bonds, none of which mature prior to January 1, 1930. Similar assessments which may be made against the lands from time to time, may, under the laws of the State, be funded into bonds maturing over a period of twenty years and, therefore, are not burdensome. There are no assessments against the By-Pass acreage.

'Before depreciation and interest. ,

Note.­ The year 1920 will be the first year of operation with construction work entirely completed, including the irrigation system.