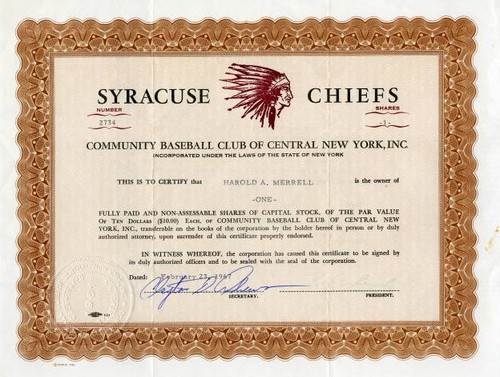 Beautiful certificate from the Syracuse Chiefs Company issued in 1967. This historic document was printed by the Goes Company and has an ornate border around it with a vignette of the Chief's mascot. This item has the original signatures of the Company's President, and Secretary, and is over 45 years old.

Certificate Vignette
The Syracuse Chiefs are a minor league baseball team based in Syracuse, New York. The team plays in the International League and is the Triple-A affiliate of the Washington Nationals. Their home stadium is Alliance Bank Stadium (formerly known as P&C Stadium) located north of downtown Syracuse. Syracuse has been represented in professional baseball since 1877, when the Syracuse Stars competed in the League Alliance, an early minor league. Syracuse fielded two major league versions of the Stars, in the 1879 National League and the 1890 American Association. Apart from those seasons, however, the Stars were members of high minor leagues such as the Eastern League (forerunner to the International) and the New York State League through 1917. From 1918-27, they competed in the International League and were an early farm team of the St. Louis Cardinals. In 1928 the IL franchise moved to Montreal and became the Montreal Royals. The Stars moved down one classification to the New York-Penn League for 1½ seasons before moving to Utica, New York. The Chiefs' franchise dates to 1934 when the International League's Jersey City Skeeters moved to Syracuse and were renamed the Chiefs. The franchise played in the IL through 1955, winning five championships, but were sold and moved to Miami as the Marlins for the 1956 campaign. A team known as the Chiefs competed in the Class A Eastern League, then two levels below the IL, during 1956-57 but moved to Allentown, Pennsylvania on July 13, 1957. Syracuse was without baseball until the 1961 season, when the Royals franchise was abandoned by its owners, the Los Angeles Dodgers, and moved to Syracuse. The Chiefs have played in Syracuse without interruption since their rebirth in 1961. The team was renamed the SkyChiefs in 1997. The name reverted to the original "Chiefs" in December 2006. History from Wikipedia and OldCompany.com (old stock certificate research service)