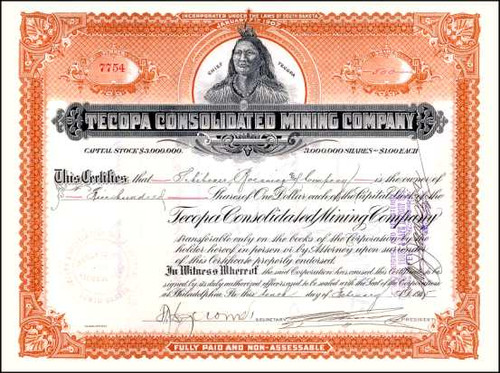 Beautifully engraved certificate from the Tecopa Consolidated Mining Company issued in 1925. This historic document has an ornate border around it with a vignette of Chief Tecopa. Printed by Union Litho. Co. This item is hand signed by the Company's President ( Nelson Z. Graves ) and its Secretary. It is over 90 years old.

Certificate Vignette
Tecopa is a small community on the southern fringe of Death Valley. Active as early as the 1870's, the Tecopa (also spelled Tecopah) company controlled the Tecopa, Noonday and Gunsight mines. The company had 17 patented claims with 2 tunnels ( 1,500' and 4,000' and 2 incline shafts 300' to 400' )In 1908 they claimed to have $3 million in ore blocked out. In 1909 a rail line was built to the mine (Tecopa Railroad). The next active period for the mine was 1913-1929. In 1918, ore sales totaled $232,426. For a brief four years, Tecopa led California in silver-lead production. Over its life, this mine was Death Valley's largest producer, having recovered more than $4 million from its ores. Rhyolite Herald, September 9, 1908 "BIG DOINGS AT TECOPA MINES " Details of development at the properties of the Tecopa Consolidated show that the mine has never looked so promising as it does today. One of the interested persons has given The Herald the following concerning the late developments: On the 500 level in the Gunsight, the vein has been exposed for 125 feet, showing values of 6 per cent lead, 3½ ounces in silver and $1.80 in gold. In addition, there is 15 feet of shipping ore, from which shipments are being made to Murray. On the 600, where the ore was recently encountered, the vein has been exposed for 40 feet, showing values of 5 percent lead, 4 ounces in silver, and $1.80 in gold. The carbonate ore on this level is 10 feet in width, with values of 30 per cent lead, 20 ounces in silver, 17 per cent iron and $2 in gold. This is in No. 1 crosscut, and the work is being duplicated in three other laterals, 50 feet apart. The mill ore has been cut on the 700 level, with a width of 30 feet that runs about 5 per cent lead. The hanging wall should be reached in 10 to 20 feet, and at that point the carbonate ore is expected. Twenty-seven men are employed in the Gunsight and ten machine drills are in commission. The north drift on the 200 level in the Noonday is out 480 feet. One crosscut measures 42 feet, with values of 31 per cent lead, 15 ounces in silver, 20 per cent iron and $2 in gold. The other crosscuts are not as good, but show milling values. In the south drift, the shipping ore averages about 7 feet in width, with 12 feet of milling ore. On the 300 level, the drifts are out 150 feet each way, and the ore bodies show about the same as on the 200, except that the north drift is not out far enough to catch the big shoot. Twenty-five men are employed in the Noonday, with ten machine drills working. The Tecopa company is now ready to resume shipments to the smelter and is desirous of securing some large teams to haul ore down to the railroad. Rhyolite Herald, November 4, 1908 "TECOPA MINES HAVE BIG RESERVES " When the control of the Tecopa Consolidated Mining company was sold to N.Z. Graves and associates of Philadelphia the management stated that in four months' time and with an outlay of a certain sum of money, at least $1,650,000 worth of ore, net, could be blocked out in the Gunsight and Noonday mines. The four months' time has passed, and it is stated upon the authority of Harry G. McMahon that the two mines today show more than $1,650,000 worth of ore in sight after deducting all expenses. The properties have been equipped with up-to-date mining shape, air drills having been installed, and equipment has been placed with the idea of continuous work on a large scale. Mr. Graves, who is one of the best-known capitalists in the Quaker city, will leave Philadelphia Thursday of this week for Tecopa, where he will make a thorough inspection of the mines. It is expected that definite plans for the big concentrator, which has been under advisement for some time, will be made in the near future. Mr. McMahon returned from Tecopa this week and will remain for a time.