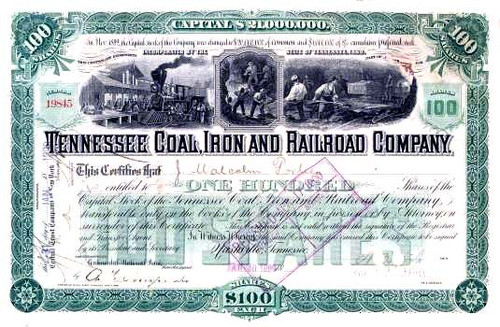 Beautifully engraved stock certificate from the Tennessee Coal, Iron and Railroad Company issued in 1899 to J. Malcolm Forbes and signed by him on the verso. This historic document was printed by the American Banknote Company and has an ornate border around it with a triple vignette of a train and men working in a mine. This item has the hand signatures of the Company's President ( N. Baxter, Jr ) and Secretary ( John F. Fletcher ) and is 118 years old. The certificate has been punch cancelled through the signatures and is in EF Condition. Certificates from the Original Dow Average Company are quite desirable and collectible.

Certificate Vignette
J. Malcolm Forbes Born in Milton, Mass., 1847 - 1904, of a wealthy Boston family. As a young man he became a famous sportsman, yachtsman, and horseman. In 1890 he purchased Jack, 2:12, for a speedway horse. As his interest grew he established Forbes Farm by buying and consolidating the Hunt, Davenport and Farrington farms. The Farrington farmhouse once stood on the site of the current Prowse residence. He purchased Nancy Hanks for $41,000 and Arion for $125,000. With Arion, Bingen, Nancy Hanks, Peter The Great, and others, Forbes Farm became the outstanding stud farm in the East. Forbes main objective is to improve the quality of the light driving horse, which, before the advent of the automobile, is in great demand throughout the country. Though Mr. Forbes never raced a stable, he was an expert on breeding fast horses, until his death in 1904. Forbes made national headlines by paying Senator Leland Stamford of California the incredible sum of $125,000 for his stallion Arion. At the time this was highest price ever paid for a horse anywhere in the world. Adding Bingen and the immortal Peter the Great, Forbes owned the three fastest trotting stallions. He added the legendary undefeated mare Nancy Hanks, model for the horse and sulky weathervanes one sees today. These horses were inducted into the Standardbred Hall of Fame. In 1890, Forbes was a well-known businessman who was also an avid sportsman. Among other achievements, he built and skippered the yacht Puritan which successfully defended the America's Cup. In 1885, J. Malcolm Forbes started financing General Charles Paine as he led three successful America's Cup defense efforts for New York Yacht Club. It was known as the first modern America's Cup defense syndicate. Edward Burgess was the designer as the syndicate produced Puritan, and created a template for America's Cup campaign management that remains the standard today. Forbes died in 1904. General Francis Peabody, a State Street lawyer purchased the farm in 1914, renaming it Maresfield. Peabody continued to breed quality horses, importing such top horses as the Irish hunter Herculean, and leading colorful hunts with hounds over the rolling hills of what is now Ponkapoag Golf Course. Forbes history from The complete book of harness racing by Philip A Pines and Canton Historical Society. Company History Beginning in the 1870's, blast furnace complexes spread throughout north Alabama, supplied with raw materials from nearby iron ore and coal mines. 1881 The Tennessee Coal and Railroad Co. was renamed to the Tennessee Coal, Iron and Railroad Co. in 1881. The Tennessee Coal, Iron, and Railroad Company was one of the largest industrial firms in the Birmingham area. Ultimately, the company was acquired by U.S. Steel in a merger in 1907 which was approved by Teddy Roosevelt. Below is a list of the first Dow Industrials companies from 1896: American Cotton Oil American Sugar American Tobacco Chicago Gas Distilling & Cattle Feeding General Electric Laclede Gas National Lead North American Company Tennessee Coal, Iron and Railroad Company U.S. Leather pfd. U.S. Rubber 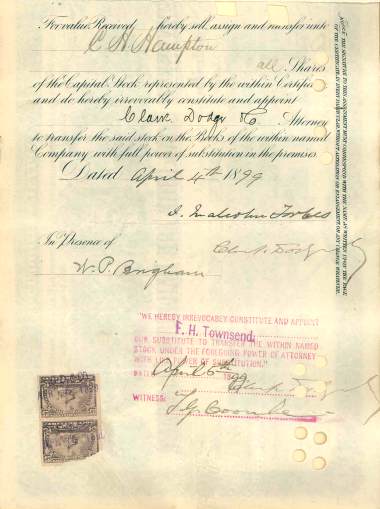