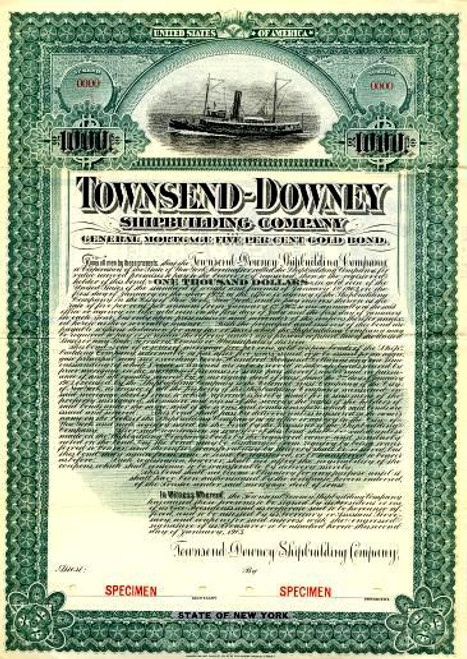 Beautiful engraved RARE specimen certificate from the Townsend-Downey Shipbuilding Company dated in 1903. This historic document was printed by American Bank Note Company and has an ornate border around it with a vignette of a ship at sea. This item is over 104 years old. 40 coupons attached on right. This is the first time we have had this for sale. 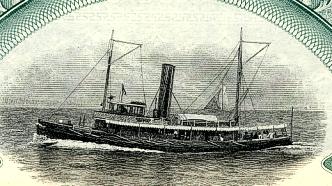 Certificate Vignette
The Townsend-Downey Shipbuilding Company built cruising and racing yachts there. The epitome of its production was a luxurious racing yacht, the Meteor, built for Kaiser Wilhelm II, emperor of Germany. This boat was launched in 1902 with President Theodore Roosevelt and two thousand other guests at the ceremonies. Shooters Island The eastern end of Shooters Island (background, forested) as seen from the waterfront of Staten IslandShooters Island (40.643° N 74.16° W) is a small uninhabited island at the southern end of Newark Bay, along the north shore of Staten Island. The boundary between the states of New York and New Jersey runs through the island, with a small portion on the north end of the island belonging to the state of New Jersey and the rest being part of the borough of Staten Island in New York City. The island was essentially made by infill from early dredging of Newark Bay in the 19th century. From approx 1900 until 1910 it was a major shipyard, the Townsend-Downey Shipbuilding Company. The entire island was occupied by buildings, foundry , pattern shop, offices etc. There were major docks and shipways which faced to the east. Contrary to a previous report, President Theodore Roosevelt did not go hunting there, but rather the Townsend-Downey Company built a yacht, The Meteor III for the Kaiser Wilhelm of Germany. It was launched at Shooters Island in February of 1902 and was accompanied by many hundreds of spectators. Thomas A Edison sent a camera man over and made one of the first news movies in US history of the event. It is available online from the Smithstonian . Alice Roosevelt christened the boat and father Teddy was there as well. The following day a reception was held at the Whitehouse for Mr Downey and representatives of the German Government. The following year saw the launching of one of the most famous and fastest sailing vessels in history, the 3 masted Schooner Atlantic. In 1905 it raced across the Atlantic and won the Kaiser's cup and set the record for the crossing under sail, which stood unbroken for almost 90 years. Another famous vessel built on Shooters Island was the Carnegie, named after Andrew Carnegie who was a friend of Mr Downey. It was built for scientific research and constructed of wood with no iron or steel that would cause magnetic anomalies. All fastenings and metal parts were of non magnetic bronze. Unmaintained during much of the later 20th century, the island has been made an official bird sanctuary , partially to discourage the US Army Corps of Eng. who wanted to blow up the island as it causes some issues to vessels coming down from Port Newark. It has begun to disintegrate into Newark Bay. The island, as well as decayed remnants of old piers, are visible by motorists passing on the Bayonne Bridge between Staten Island and Bayonne, New Jersey. The remains of the once active shipyard are still present, but diminishing every year. Shooter's Island began to support nesting wading birds, cormorants and gulls in the early 1970's. At its peak in 1995, the island supported 400 nesting pairs of herons, egrets, ibis and 121 nesting pairs of Double-crested Cormorants1. The island is now owned by the City of New York and is maintained by New York City Department of Parks and Recreation as a bird sanctuary. History from Wikipedia and OldCompanyResearch.com. About Specimens Specimen Certificates are actual certificates that have never been issued. They were usually kept by the printers in their permanent archives as their only example of a particular certificate. Sometimes you will see a hand stamp on the certificate that says "Do not remove from file". Specimens were also used to show prospective clients different types of certificate designs that were available. Specimen certificates are usually much scarcer than issued certificates. In fact, many times they are the only way to get a certificate for a particular company because the issued certificates were redeemed and destroyed. In a few instances, Specimen certificates we made for a company but were never used because a different design was chosen by the company. These certificates are normally stamped "Specimen" or they have small holes spelling the word specimen. Most of the time they don't have a serial number, or they have a serial number of 00000. This is an exciting sector of the hobby that grown in popularity over the past several years.