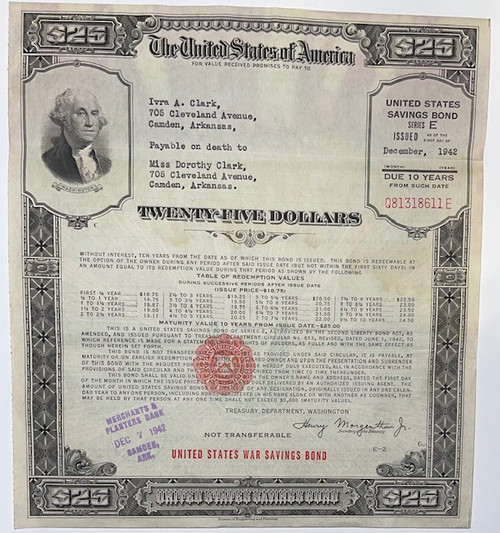 Beautifully engraved SCARCE certificate from the United States issued on December 7, 1942 and stamped in red "United States War Savings Bond". This certificate was issued on the one year anniversary of the Pearl Harbor Attack on December 7, 1941 from Camden, Arkansas. This historic document was printed by the Bureau of Engraving and Printing and has an ornate border around it with a vignette of George Washington. This item also has the printed signatures of the U.S. Secretary of the Treasury, Henry Morgenthau and is over 80 years old. Condition is fine with light toning on the back with a center fold for storage. 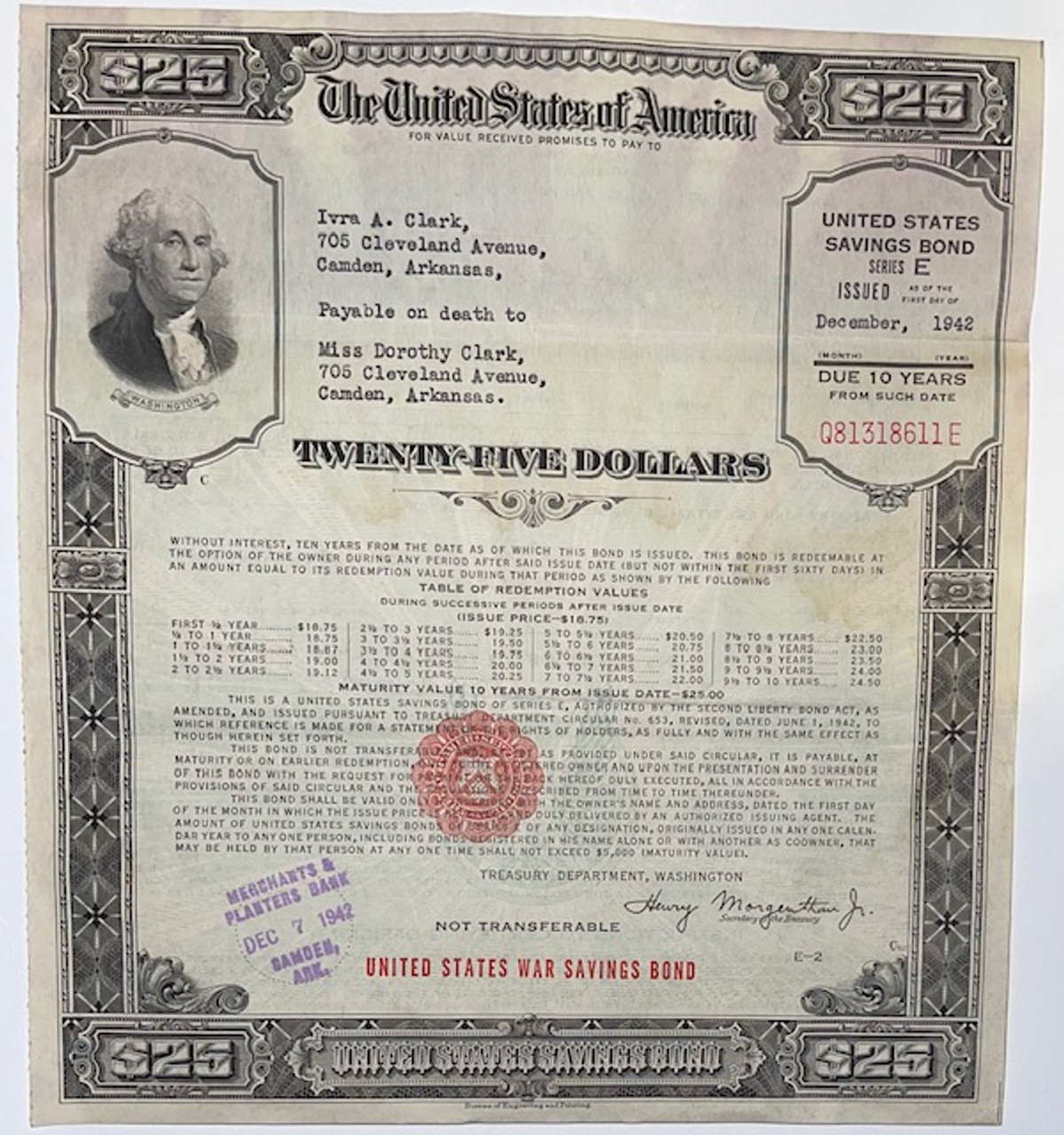 In 1941, in an effort to control inflation, the U.S. Treasury began marketing the new Series E bonds U.S. Savings Bonds as "defense bonds". The government used the hype of the war to market the bonds to the country as a way to raise money for the war, when in fact they were used to remove money from the economy to control inflation. The first one was sold to President Franklin D. Roosevelt on May 1, 1941, by Secretary of the Treasury Henry Morgenthau. After the formal entry of the United States into the war in December of that year, these bonds became known as "war bonds". These bonds were simply the latest offering of the U.S. Savings Bonds program that had begun in 1935, which replaced U.S. Postal Savings Bonds, and continues to this day. However, the mood of the nation at that time allowed the U.S. government to market Series E bonds as "war bonds", "war loans", "victory bonds", and by other names meant to appeal to a sense of patriotism. Series E U.S. Savings Bonds were promoted and marketed by the United States of America government as war bonds from 1941 to 1980. When Americans refer to war bonds, they are usually referring to Series E bonds. Those issued from 1941 to November 1965 accrued interest for 40 years; those issued from December 1965 to June 1980, for 30 years. They were generally issued at 75 cents per dollar face value, maturing at par in a specified number of years that fluctuated with the rate of interest. Denominations available were $25, $50, $75, $100, $200, $500, $1,000, $5,000 and $10,000. Series E bonds were issued only in registered, physical form and are not transferable. The guaranteed minimum investment yield for the bonds was 4 percent, compounded semiannually. During WWII, Government Bond rallies were held throughout the country with famous motion picture celebrities to help promote the bonds and the war effort. Free movie days were held in theaters nationwide with a bond purchase as the admission. The physical size of the bond was reduced in 1944 to save paper and money. Towards the end of the war, the bonds were renamed Victory Bonds. History from StockResearch.pro (Professional Old Stock Certificate Research Service).