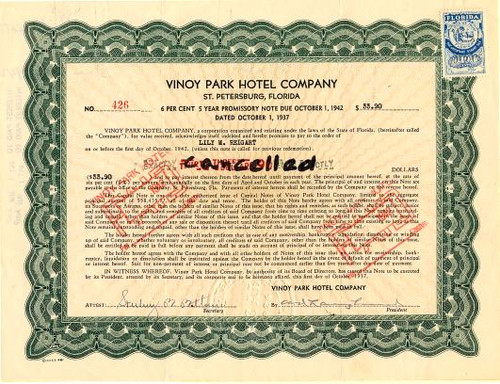 Beautiful certificate from the Vinoy Park Hotel Company issued in 1937. This historic document was printed by Goes. This item has the signatures of the Company's President and Secretary and is over 69 years old. Built by Pennsylvania oilman Aymer Vinoy Laughner, the Vinoy Park Hotel was the grandest of the Boom Era hotels. Built at the lavish cost of $3.5 million, it was at the time the largest construction project in Florida's history. The contractor set a construction record for completing the 375-room hotel in just under 10 months, in time for a grand opening on New Year's Eve 1925, considered good luck for a hotel. Indeed, the hotel prospered even during the Depression years, and hosted such influential people as Calvin Coolidge, Babe Ruth, Admiral Byrd, Herbert Hoover, Alf Landon, F. Scott Fitzgerald, the Fleischmanns, the Pillsburys, the Biddles of Philadelphia and the Smiths, of Smith Corona. During World War II, the hotel was used by the Army Air Corps. In late 1946, Laughner sold it to Charles Alberding. The hotel continued to thrive during the late 40s and the 50s, but then started a slow decline. By the early 1970s, volleyball games were being played in the run-down ballroom and the rooms were going for $7 a night. It finally was shut down in 1974 and remained closed for 18 years. Stouffer Hotel Company took over the hotel, spending $93 million and two years to renovate it (the ballroom had been stripped even of its floor boards and paneling and was invaded by pigeons and squatters; one of the workmen said he saw an alligator living in the hotel basement). You would not know it seeing the restoration. Many magnificent features were painstakingly restored, like the glazed quarry tile floor in the lobby (which keeps the area cool), original stenciled pecky cypress beamed ceiling, Italian marble front desk, the stenciled borders on the walls of the exquisite dining room, the ornate plaster castings in the ballroom, the authentic Augusta Block bricks lining the front driveway, the leaded glass windows. The Great Gatsby-era effect today is completed with a sweeping front veranda with wicker chairs, tropical foliage and gently turning paddle fans. Besides restoring it to its former grandeur, the resort, which reopened in 1992 (Stouffer Hotel Company was acquired by the Renaissance Hotel group in 1993), was enhanced with features to appeal to a contemporary audience: a tennis complex of 12 Har-Tru courts (lighted for night play); two heated outdoor swimming pools and three spas, a fully equipped fitness center, a 74-slip marina. The Vinoy even has bicycles available to rent. History from Wikipeida and OldCompanyResearch.com.