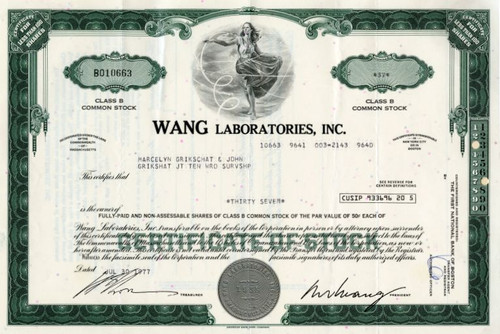 Beautifully engraved certificate from the Wang Laboratories, Inc, issued in no later than 1982. This historic document was printed by the American Banknote Company and has an ornate border around it with a vignette of an allegorical woman. This item has the printed signatures of the company's president, An Wang and its treasurer. Light folds. This certificate is over 33 years old and very hard to find. An Wang (1920-1990) immigrated to the U.S. from his hometown of Shanghai in 1945, and three years later earned a Ph.D. in applied physics from Harvard University. In 1951 he founded Wang Laboratories, Inc., which under his technological and managerial guidance soon became one of the most recognized and successful corporations of the dawn of the Information Age. Although he personally gained more than 35 patents, Wang's first major contribution to information technology was his invention of the magnetic "Pulse Transfer Controlling Device" (patent #2,708,722, granted 1955). By precisely regulating the flow of magnetic energy, Wang made magnetic core memory a practical reality. In 1965, Wang introduced "LOCI," the first desktop computer to generate logarithms at a single keystroke. The technology of LOCI formed the basis of the later Wang electronic desk calculator. In the 70s and 80s, Wang's own inventions helped Wang Laboratories become a major manufacturer of the prototypical desktop computers used in laboratories and schools. Throughout those years, Wang oversaw an uninterrupted series of more compact and efficient instruments and systems for use in office automation and information processing.