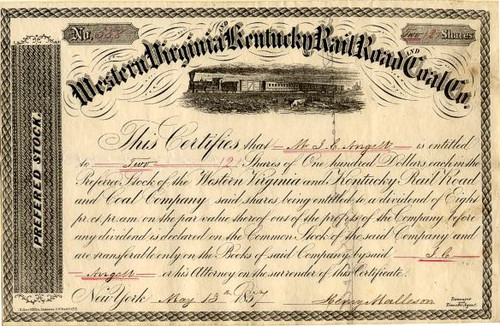 Beautiful certificate from the Western Virginia and Kentucky Rail Road and Coal Company issued in 1857. This historic document was printed by Robert H. Ellis and has an ornate border around it with a vignette of an steam locomotive. This item has the signatures of the Company's Treasurer and Transfer Agent, Henry Malleson and is over 150 years old. The certificate was issued to and signed on the back by J. C. Angell.

Certificate Vignette
West Virginia is a state of the United States in the Appalachia region. West Virginia broke away from Virginia during the American Civil War and was admitted to the Union as a separate state on June 20, 1863 (an anniversary now celebrated as West Virginia Day in the state). It is the only state formed as a direct result of the American Civil War. It (along with Vermont) is one of only two states to form by seceding from a pre-existing state. The Census Bureau considers West Virginia part of the South because much of the state is below the Mason-Dixon Line, despite its northern panhandle extending into Pennsylvania and Ohio as far north on parallel to Staten Island, New York. Many citizens of West Virginia claim they are part of Appalachia, rather than the Mid-Atlantic or the South, while the state's Northern Panhandle, and North-Central region feel an affinity for Pittsburgh, Pennsylvania. Also, those in the Eastern Panhandle feel a connection with the Washington, D.C. suburbs in Maryland and Virginia, and southern West Virginians often consider themselves Southerners. Finally, the towns and farms along the mid-Ohio River have an appearance and culture somewhat resembling the Midwest[citation needed]. For these reasons, West Virginia can be noted as the southernmost Northeastern state, the northernmost Southeastern state, the easternmost Midwestern state as well as the westernmost Eastern state. The capital and largest city is Charleston. The state is noted for its great natural beauty, its historically significant logging and coal mining industries, and its labor history. It is also well known as a tourist destination for those people interested in outdoor activities such as skiing, whitewater rafting, rock climbing, fishing, hiking, and hunting. History from Wikipedia and OldCompanyResearch.com.