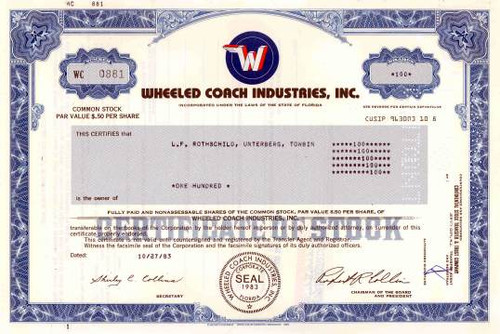 Beautifully engraved certificate from the Wheeled Coach Industries, Inc. issued in 1983. This historic document was printed by the Security - Columbian United States Banknote Corporation and has an ornate border around it with a vignette of the company logo. This item has the printed signatures of the Company's Chairman of the Board President and Secretary and is over 20 years old.

Certificate Vignette
Wheeled Coach has kept its eye on the future; always working with customers to improve upon today's emergency vehicles. The goal has been to make emergency vehicles safer for both patient and crew, and at the same time, make them more efficient. Wheeled Coach is a wholly-owned subsidiary of Collins Industries, Inc., a publicly held company traded on the NASDAQ (Symbol:COLL). Headquartered in Orlando, Florida, Wheeled Coach markets their products through an extensive network of direct and authorized factory representatives, both domestically and worldwide. Since 1971, Collins Industries has grown to over 1,000 employees in six plants comprising over one million combined square feet of manufacturing space. The Company sells its products throughout the United States and abroad.