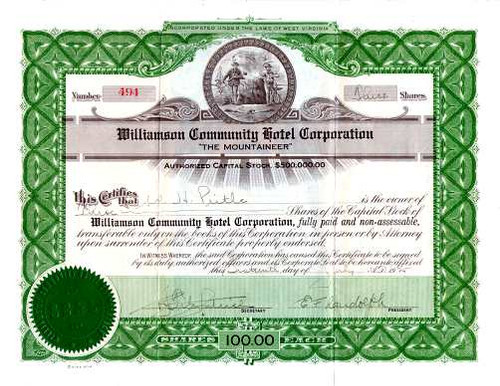 Beautifully engraved certificate from the Williamson Community Hotel Corporation issued in 1925. This historic document has an ornate border around it with a vignette of the West Virginia State Seal. This item is hand signed by the company's president and secretary and is over 76 years old. Williamson was incorporated as a city on February 22, 1905, by a special act of the legislature. That same year, the National Bank of Commerce, now Community Trust Bank, was organized. In 1906, a fire destroyed over twenty buildings on Third Avenue. In 1907, underpasses were built running under the N&W railway. The trains posed a hazard to carts and pedestrians, especially at night. Also in 1907, Main Building Grade School was completed. In the main hall, a statue of Paul Revere, given by Wallace J. Williamson, stood prominently. In 1908, the first bridge connecting Williamson with Kentucky was completed. The first graduates from Williamson High School were in 1910. There were only two, Mary Belle Culross and Okey P. Keadle. The classes of 1910 through 1917 graduated from the old, two story wooden 1880's schoolhouse that stood near Main Building, about where WHS is today. The old Williamson High School was built in 1916-17. The first class to graduate from the building was in 1918. The last was 1973. After that, the building served as Williamson Junior High School. The old WHS was demolished in 1986. In 1911, the first movie theater, the Hippodrome, opened. It was located on the corner of Second Avenue and Pike Street, in the building known as the B&L Annex. Today, it is the site of The Flower Peddlers. Hyman Banks owned the Hippodrome. In May of 1921, he moved his theater to the Patterson Building on Third Avenue. The theater's name was changed to the Cinderella. The Cinderella remained in operation until the 1984 flood. Williamson's first real hospital opened in 1914. It was organized by Drs. Russell Salton and George T. Conley. The hospital was on Logan Street in the building later known as the Alvon Hotel. In 1927, the hospital was gutted by fire. A new building was erected on Mulberry Street. Completed in 1928, the new hospital was named Williamson Memorial. The building remained in service until 1988, when a new building was erected on the old WHS field at the top of Alderson Street. In the early months of 1915, three lots were purchased by the city for $4,000 at the corner of Third Avenue and Harvey Street. On May 27, 1915, a contract was awarded to Martin & Justice Contractors to construct a new three story City Hall on the site to replace the old City Hall on Second Avenue. The total cost of the new building was $26,000. Also, in 1915, a full time fire department was established. The automobile was also becoming a popular means of transportation in the city. Later that year, a new 15 mph speed limit was set for downtown. The speed limit remains the same today. After World War I, a Memorial Building was erected on Logan Street for $125,000. Today, the building houses the Williamson Public Library and the Health Department. Another landmark in Williamson, the Mountaineer Hotel, was built in 1925. The new $600,000 building was, and still is, a showpiece of downtown Williamson. A new newspaper, the Williamson Daily News, was first published in 1911. It is the only remaining newspaper in Williamson.