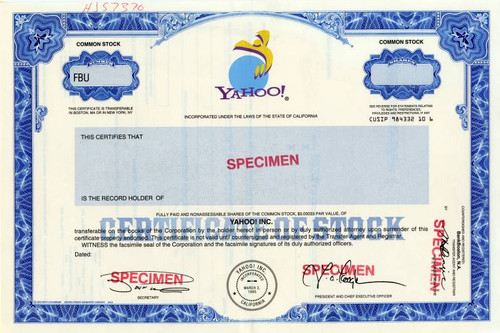 Beautiful engraved specimen certificate from the Yahoo incorporated . This historic document was printed by American Bank Note Company and has an ornate border around it with a vignette of the company logo. This item has the printed signatures of the Company's President/CEO (Jerry Yang) and Secretary . 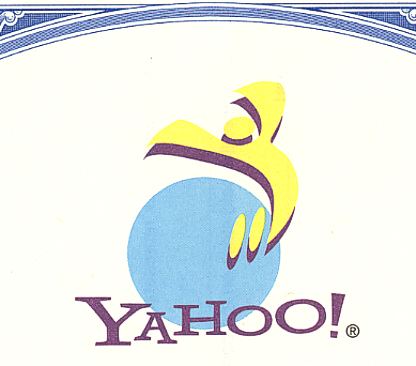 Certificate Vignette
Yahoo! Inc. is a global Internet communications, commerce and media company that offers a comprehensive branded network of services to more than 192 million individuals each month worldwide. As the first online navigational guide to the Web, www.yahoo.com is the leading guide in terms of traffic, advertising, household and business user reach. Yahoo! is the No. 1 Internet brand globally and reaches the largest audience worldwide. The company also provides online business and enterprise services designed to enhance the productivity and Web presence of Yahoo!'s clients. These services include Corporate Yahoo!, a popular customized enterprise portal solution; audio and video streaming; store hosting and management; and Web site tools and services. The company's global Web network includes 24 World properties. Yahoo! has offices in Europe, the Asia Pacific, Latin America, Canada and the United States, and is headquartered in Santa Clara, Calif. Like many other aspects of the computer age, Yahoo! began as an idea, grew into a hobby and lately has turned into a full-time passion. The two developers of Yahoo!, David Filo and Jerry Yang, Ph.D. candidates in Electrical Engineering at Stanford University, started their guide in April 1994 as a way to keep track of their personal interests on the Internet. Before long they found that their home-brewed lists were becoming too long and unwieldy. Gradually they began to spend more and more time on Yahoo!. During 1994 they converted Yahoo! into a customized database designed to serve the needs of the thousands of users that began to use the service through the closely bound Internet community. They developed customized software to help them efficiently locate, identify and edit material stored on the Internet. The name Yahoo! is supposed to stand for "Yet Another Hierarchical Officious Oracle" but Filo and Yang insist they selected the name because they considered themselves yahoos. Yahoo! itself first resided on Yang's student workstation, "akebono" while the search engine was lodged on Filo's computer, "konishiki." (These machines were named after legendary Hawaiian sumo wrestlers.) In early 1995 Marc Andreessen, co-founder of Netscape Communications in Mountain View, Ca., invited Filo and Yang to move their files over to larger computers housed at Netscape. As a result Stanford's computer network returned to normal, and both parties benefited. Today, Yahoo! contains organized information on tens of thousands of computers linked to the Web. The San Jose Mercury news recently noted that "Yahoo is closest in spirit to the work of Linnaeus, the 18th century botanist whose classification system organized the natural world." In January 1994, Jerry Yang and David Filo were Electrical Engineering graduate students at Stanford University. In April 1994, "Jerry's Guide to the World Wide Web" was renamed "Yahoo!". Filo and Yang said they selected the name because they liked the word's general definition, which comes from Gulliver's Travels by Jonathan Swift: "rude, unsophisticated, uncouth." Its URL was akebono.stanford.edu/yahoo. By the end of 1994, Yahoo! had already received one million hits. The Yahoo! domain was created on January 18, 1995. Yang and Filo realized their website had massive business potential, and on March 1, 1995, Yahoo! was incorporated. On April 5, 1995, Sequoia Capital provided Yahoo! with two rounds of venture capital. On April 12, 1996, Yahoo! had its initial public offering, raising $33.8 million dollars, by selling 2.6 million shares at $13 each. "Yahoo" had already been trademarked for barbecue sauce (and knives (by EBSCO Industries). Therefore, in order to get the trademark, Yang and Filo added the exclamation mark to the name. History from Wikipedia and OldCompanyResearch.com (old stock certificate research service). About Specimens Specimen Certificates are actual certificates that have never been issued. They were usually kept by the printers in their permanent archives as their only example of a particular certificate. Sometimes you will see a hand stamp on the certificate that says "Do not remove from file". Specimens were also used to show prospective clients different types of certificate designs that were available. Specimen certificates are usually much scarcer than issued certificates. In fact, many times they are the only way to get a certificate for a particular company because the issued certificates were redeemed and destroyed. In a few instances, Specimen certificates we made for a company but were never used because a different design was chosen by the company. These certificates are normally stamped "Specimen" or they have small holes spelling the word specimen. Most of the time they don't have a serial number, or they have a serial number of 00000. This is an exciting sector of the hobby that grown in popularity over the past several years.