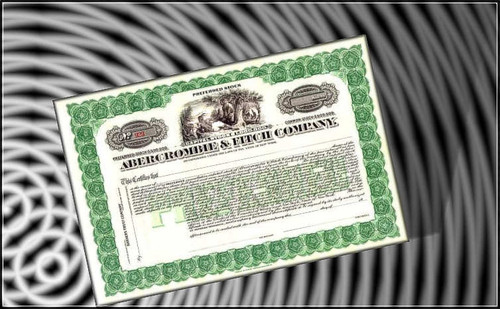 SOLD OUT _ Beautifully engraved unissued Certificate from the Abercrombie & Fitch Company printed around 1914. This historic document was printed by the American Banknote Company and has an ornate border around it with a vignette of indians overlooking a cliff hunting deer. This item is over 92 years old.

Certificate Vignette
The brand was established in 1892 and became known as a supplier of rugged, outdoor gear. It was acquired by The Limited Inc. in 1988 and in 1992 was repositioned as a more fashion-oriented casual apparel business. An initial public offering was held in 1996, where The Limited retained 84 percent of the company. It became independent in June 1998, when the remainder of the company was spun off to Limited shareholders. Abercrombie & Fitch is a retailer of casual clothing and accessories for men and women targeting the collegiate demographic. The company operates over 200 stores including 14 "abercrombie" stores for children and teenagers -- and also publishes a quarterly combination magazine/catalog. In 1892 Abercrombie & Fitch began under the name David T. Abercrombie Co., a small waterfront shop and factory in downtown New York City owned by David Abercrombie. David Abercrombie, born and raised in Baltimore, Maryland, was a former trapper, prospector, topographer and railroad surveyor. He was also an inventor, an ingenious designer of tents, rucksacks and other camping equipment. It was his love of the great outdoors that inspired him to begin Abercrombie & Co., a shop dedicated to selling only the highest-quality camping, fishing and hunting gear. His clientele consisted mostly of professional hunters, explorers and trappers. And a man named Ezra Fitch. Ezra Fitch was a successful lawyer in Kingston, New York. Restless and thoroughly bored with his life of law, Fitch spent all of his free time trekking the slopes of the Adirondacks and casting flies into the streams of the Catskill. In his search for exceptional outdoor gear, he had come to rely upon David Abercrombie's shop, becoming one of its most devoted customers. He was so devoted, in fact, that in 1900 he had convinced David Abercrombie to let him buy into the business and become a partner. By 1904, the shop (which by now had moved to 314 Broadway) was incorporated and the name was officially changed to Abercrombie & Fitch. Both David Abercrombie and Ezra Fitch were stubborn, hot-tempered men, and they had vastly different views about the future of their business. Abercrombie was more conservative, content to continue the store as it was, selling professional gear to professional outdoorsmen. Fitch, on the other hand, was more of a visionary. He was positive that the future of the business lay in expansion, selling the outdoors and its delights to more of the general public. Long arguments between the two men ensued. Inevitably, the partnership came to an end, and David Abercrombie resigned in 1907. In the meantime, the store continued to expand. Ezra Fitch was a determined innovator. As a result of his imagination, hard work and sheer force of will, what he created was no ordinary sporting goods shop. Fitch was determined that the store have an outdoor feeling. Stock was not hidden behind glass cabinets. Instead, it was displayed as if in use. He set up a tent and equipped it as if it were out in the middle of the wilds of the Adirondacks. A campfire blazed in one corner, where an experienced guide was always in attendance, imparting valuable information to interested customers. The clerks hired at A&F were not professional salesmen, but true rugged outdoorsmen. Talking was their pleasure and selling was performed only at the customers' insistence. By 1913, the store moved to a more fashionable and easily accessible midtown address just off Fifth Avenue, expanding its inventory to include sport clothing. A&F became the first store in New York to supply such clothing to women as well as men. Shortly after Abercrombie's resignation from the company, A&F began publishing a catalog. This impressive book featured 456 pages of outdoor gear and clothing as well as sage camping, hunting and fishing advice to 50,000 prospective customers around the world. Orders soon began to flood in from around the globe, bringing international status to the ever-expanding store. By 1917, Abercrombie & Fitch moved to Madison Avenue and 45th Street, where it occupied an entire twelve story building. Outside a sign proclaimed "Where the Blazed Trail Crosses the Boulevard." Abercrombie & Fitch had become the largest sporting goods store in the world, as well as the most impressive. A log cabin was built on the roof, which Fitch used as a townhouse. Next to it he had a casting pool installed, where serious fishermen could sample the store's impressive collection of rods and flies. In the basement, an armored rifle range was set up. There was also a golf school, a floor dedicated solely to completely set-up camps, and a dog and cat kennel. In addition to the more standard types of outdoor goods, A&F had a selection of exotic sporting equipment that would make the imagination reel: hot air balloons, yachting pennants, portable trampolines, treadmills for exercising dogs, throwing knives, shirts of chainmail, leopard collars, and everything a person could possibly need for falconry. Abercrombie & Fitch outfitted many great hunting and exploration expeditions, like Theodore Roosevelt's trips to Africa and the Amazon and Robert Peary's expedition to the North Pole. Ernest Hemingway bought his guns there. Presidents Hoover and Einsenhower relied on A&F for the best fishing equipment. Other famous clients included Amelia Earhart, Presidents Taft, Harding and Kennedy, the Duke of Windsor, Bing Crosby, Howard Hughes, Katharine Hepburn, Greta Garbo and Clark Gable. And there was more: Cole Porter ordered his evening clothes from Abercrombie & Fitch. During Prohibition, A&F was the place to buy hip flasks. By 1928, Ezra Fitch retired from the business to enjoy his remaining few years in the great outdoors that he loved so much. Abercrombie & Fitch continued to grow, with stores opening up in Chicago and San Francisco. But by the late '60s the store hit upon hard times and went bankrupt in 1977. Oshman's Sporting Goods, based in Houston, Texas, bought the company. Business wasn't good. The Limited Inc. bought Abercrombie & Fitch in 1988. And today, Abercrombie & Fitch thrives as a publicly held company. A powerful lifestyle brand, business is thriving at Abercrombie & Fitch with hundreds of stores.