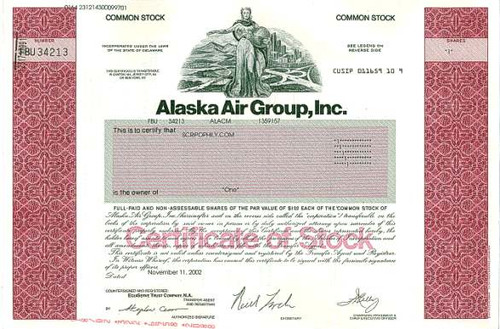 Beautifully engraved certificate from the Alaska Air Group, Inc. This historic document was printed by the Security-Columbian United States Banknote Company and has an ornate border around it with a vignette of an allegorical woman holding a globe with a city in the background. This item has the printed signatures of the Company's Chairman of the Board and Secretary. 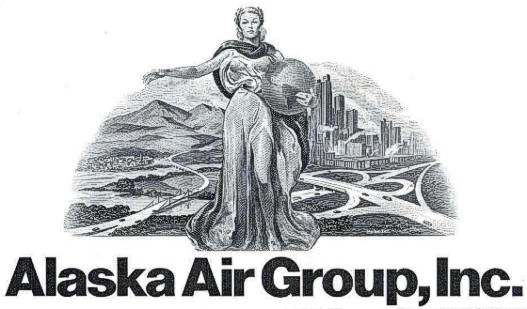 Certificate Vignette
Alaska Air Group, Inc., is the holding company for Alaska Airlines and Horizon Air, Seattle-based carriers that collectively serve more than 70 destinations in the Western U.S., Canada, and Mexico. Alaska Air Group was organized as a Delaware corporation in 1985. Alaska Airlines, Inc., an Alaska corporation founded in 1932, is noted for its award-winning customer service. The airline, which accounts for about 80% of Air Group revenues, provides scheduled air service to 38 cities in Alaska, Washington, Oregon, California, Nevada, Arizona, and British Columbia, plus Chicago and five destinations in Mexico. Its major hubs are Anchorage, Seattle, Portland, and Los Angeles. Horizon Air Industries, Inc., a Washington corporation organized in 1981, is similarly noted for outstanding customer service. Horizon accounts for about 20% of Air Group revenues and provides air transportation to more than 40 destinations in Washington, Oregon, Idaho, Montana, California, Arizona, Colorado, British Columbia, and Alberta. Its major hubs are Seattle, Portland, and Boise. For nearly 70 years, Alaska Airlines and its people have been guided through thick and thin by a shared commitment to integrity, caring, resourcefulness, professionalism and spirit. Especially spirit - an Alaskan spirit, born in the land the airline is named after - a place where "can-do" and "neighbor-helping-neighbor" are facts of life. The result? A long list of aviation milestones, as well as countless stories of people going out of their way to help others - both in the course of business and in the support of organizations that makes our communities better places to live. In the process, Alaska has grown from a small regional airline to one of the most respected in the nation. Carrying more than 12 million customers per year, Alaska's route system spans more than 40 cities and three countries. The Alaska Airlines fleet of 96 Boeing jets is the youngest among all major airlines. And its reputation for outstanding service consistently earns best U.S. airline recognition from the likes of Travel + Leisure and CondÃ© Nast Traveler magazines. Storied Roots The foundation of this success was laid in 1932, when Mac McGee started flying his three-seat Stinson between Anchorage and Bristol Bay, Alaska. Finances were tight, but perseverance ruled the day -- Mac and his team often worked round-the-clock, even though the next paycheck might be weeks away. A merger with Star Air Service in 1934 created the largest airline in Alaska. After several more mergers, the name was changed a couple of times -- until they found one that stuck: Alaska Airlines. By the late 1940s, using surplus military aircraft, Alaska had branched into worldwide charter work, including the Berlin Airlift in 1948 and Operation Magic Carpet, the airlift of thousands of Yemenite Jews, to Israel in 1949. In the late 1960s, Alaska strengthened its operating base by merging with Alaska Coastal-Ellis and Cordova airlines, legendary Southeast Alaska carriers owned by aviation pioneers Shell Simmons, Bob Ellis and Mudhole Smith. Alaska's world now stretched from Fairbanks south to Ketchikan and down to Seattle. And in some of the coldest days of the Cold War, Alaska made headlines with regular charters to the Soviet Union. A New Era When Fairbanks businessmen Ron Cosgrave and Bruce Kennedy came on board in 1972, the airline was in a financial fight for its life. They went to work setting goals and bringing people together. They won back the trust of creditors and improved on-time performance. One break that went their way was the construction of the trans-Alaska Pipeline; carrying supplies, equipment and workers gave Alaska a shot in the arm. Bottom line, customer service became key in this new era. And it put the airline on course for what would be a nearly unprecedented record in the industry: 19 straight years of profitability. In 1979, the airline industry was deregulated. For many carriers, this was the end of the road. For Alaska, it was a new beginning. The airline expanded methodically throughout the West Coast and in 1987 joined forces with two carriers similarly committed to outstanding customer service - Horizon Air and Jet America. By the end of the 80s, Alaska had tripled in size. Its fleet had increased five-fold. And the route map included scheduled service to Mexico and Russia. History from company press information.