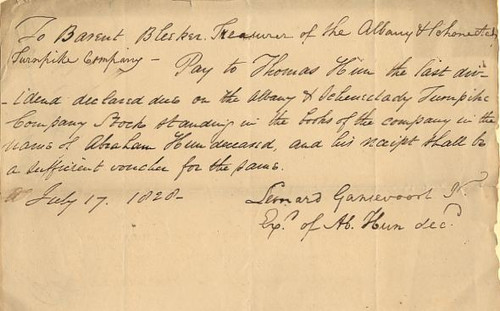 Beautiful historic stock receipt from the Albany & Schenectady Turnpike Company issued in 1826. This item has the signatures of the Company's Officer and is over 186 years old. 1826 Albany, New York - Handwritten note, 1p., 8" x 5", July 17, 1826, signed, "Leonard Gansevoort Jr", Exr of Ab. Hun decd. The note was sent to Barent Bleeker with request to pay Thomas Hun the dividend on the Albany & Schenectady Turnpike Stock. Leonard Gansevoort, Jr. was born in June 1754. He was the son of Albany brewer Johannes and his first wife, Maria Douw Gansevoort. Known as "Leonard Jr." to separate him from his slightly older cousin and sometimes patron, he was trained for the law by Peter Van Schaack. According to the family historian, he was exceptionally intelligent and served well (if unspectacularly) as a family attorney. In April 1777, he married Rensselaerwyck native Maria Van Rensselaer at the Schaghticoke Dutch church. By 1801, at least eleven children had been christened in Albany where he was a member and church officer. Married at the height of the war, Leonard Jr. served the American cause and was a member and later secretary of the Albany Commissioners for Detecting and Defeating Conspiracies. Afterwards, he was accorded a bounty right. In 1778, he first was elected assistant alderman for the third ward. He was re-elected annually until 1787, when he was chosen alderman. He was active in the work of council committees and is said to have served for over twenty years. The census of 1790 configured his Market Street home and his second ward lot also was noted on city assessment rolls. During the late 1790s, he moved across the river to Wolvenhook and was appointed to the Rensselaer County court. A decade or so later, he came back to Albany to live in the large Market Street house (No. 386) owned by his deceased son-in-law and located next to his family's landmark house. Leonard Gansevoort, Jr. died in December 1834 at the age of eighty-one. An obituary described him as "at his death was oldest attorney and counselor on the roll of the Supreme Court[;] 30 yrs. member of the common council; [and] judge of the court of common please for many years." His widow survived until 1841. History from The life of Leonard Gansevoort, Jr. and OldCompany.com.