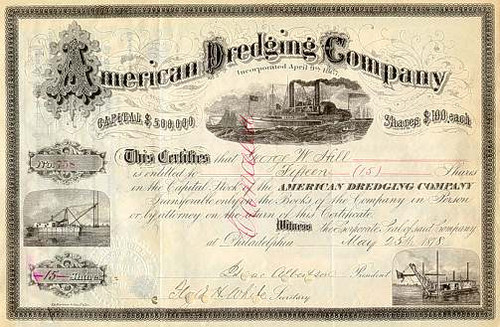 Beautifully engraved certificate from the American Dredging Company issued no later than 1901. This historic document has an ornate border around it with vignettes of ships and dreggers. This item is hand signed by the company's president and secretary and is over 106 years old. In 1993, Weeks Marine acquired the American Dredging Company, which was one of the largest and oldest dredging companies in the United States. Founded in 1867, American Dredging participated in the development of many of the technologies which are common in today's dredging industry. With that acquisition, Weeks took over the upland disposal area along the Delaware River that had been operated by American Dredging. That area is used as a disposal area for much of the material dredged from facilities along the Delaware River