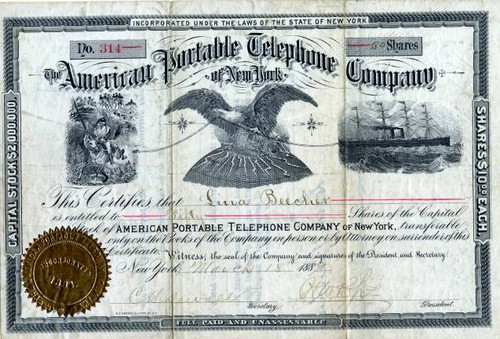 Beautiful RARE certificate from the American Portable Telephone Company of New York issued in 1889. This historic document was printed by the W. Badeau Company of New york and has an ornate border around it with a vignette of colonial military man (minuteman) riding on a horse, ship at sea and an eagle all connected by a wire. This item has the signatures of the Company's President, Henry W. Pope and Secretary, C. H. Sewall and is over 125 years old. This is the first time we have had this certificate for sale and believe it to be quite rare. Folds with some wear. Issued to Lina Beecher.

Certificate Vignette
This company was clearly 100 years ahead if its time, but never got off the ground. Henry W. Pope was an early telephone engineer and was a co founder and General Superintendent of the Bell Telephone Company of New York, a special agent of the American Telephone and Telegraph Company and a co founder of The Telephone Pioneers of America. His brother was famed telephone engineer, Franklin Pope. C.H.Sewall was the Secretary of the Albany District Telegraph Co. in May 1880.