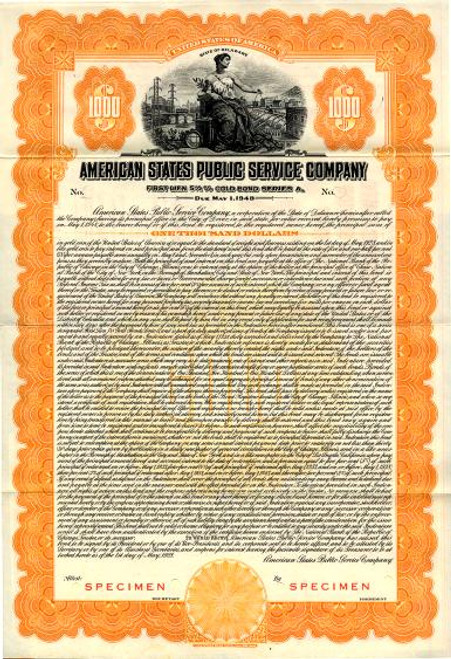 Beautifully engraved RARE Specimen $1000 Gold Bond Certificate from American States Public Service Company Gold Bond dated 1928. This historic document was printed by Columbian Bank Note Company and has an ornate border around it with a vignette of an allegorical woman with a dam power plant in the background. This item is over 92 years old.

Certificate Vignette
American States Public Service Company was incorporated in 1928. The company changed its name to the Southern California Water Company (SCW) in 1936. SCW was listed on the NASDAQ Exchange in 1990. SCW moved to the NYSE in 1993. American States Water Company is an investor-owned utility publicly traded on the New York Stock Exchange under the trading symbol AWR. Through its subsidiary companies - Southern California Water Company and American States Utility Services - American States Water Company provides water delivery, wastewater treatment, customer billing, 24 hour customer support, and meter reading services to approximately 330,000 customer accounts throughout California and northern Arizona. American States Water Company (AWR) has grown significantly since 1929 when the original water systems were acquired. Yesterday's visions have developed into today's reality -- a viable service provider focused on the needs of over one million people throughout California and portions of Arizona with affordable rates. In 1998, the growth trend continued when American States Water Company became the parent company of a new subsidiary dedicated to the non-regulated water industry, American States Utility Services, Inc. (ASUS). American States Utility Services, Inc., assists communities by providing options for lease or purchase of tailored service contracts ranging from meter reading, customer service, system maintenance, and full operations options. About Specimens Specimen Certificates are actual certificates that have never been issued. They were usually kept by the printers in their permanent archives as their only example of a particular certificate. Sometimes you will see a hand stamp on the certificate that says "Do not remove from file". Specimens were also used to show prospective clients different types of certificate designs that were available. Specimen certificates are usually much scarcer than issued certificates. In fact, many times they are the only way to get a certificate for a particular company because the issued certificates were redeemed and destroyed. In a few instances, Specimen certificates we made for a company but were never used because a different design was chosen by the company. These certificates are normally stamped "Specimen" or they have small holes spelling the word specimen. Most of the time they don't have a serial number, or they have a serial number of 00000. This is an exciting sector of the hobby that grown in popularity over the past several years.