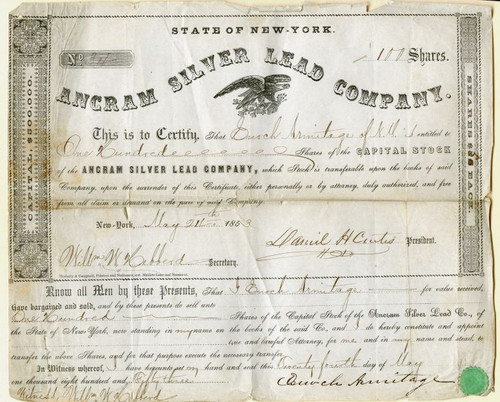 Beautiful RARE old mining certificate from the Ancram Silver Lead Company issued in 1853. This historic document has a vignette of an eagle and the signatures of the Company's officers. Some signs of wear as seen in the scan. This is the first time we have seen this company's certificate for sale. 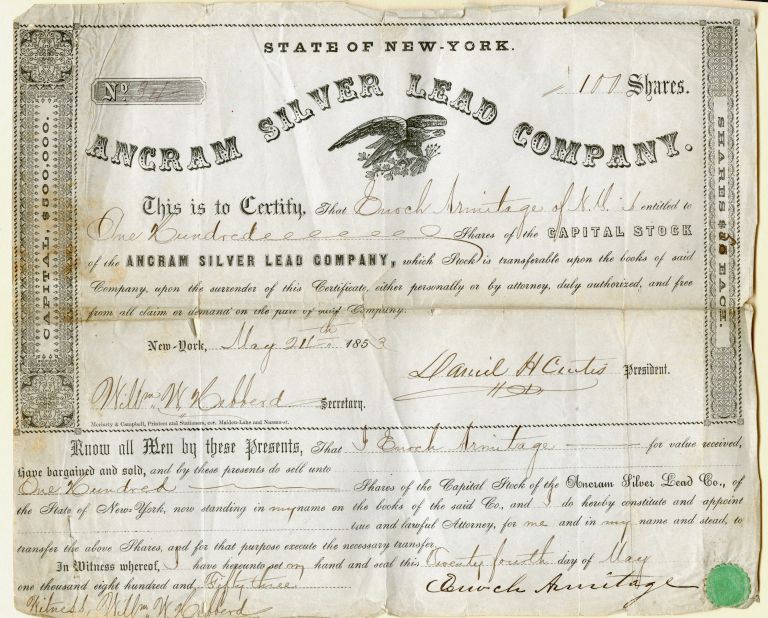 Certificate
The Mining Magazine and Journal of Geology, Mineralogy, Metallurgy ..., Volume 1 - 1853: We have received a copy of the Report of Major Farrington respecting a mine in Columbia County, New York, called the Ancram Silver Lead Mine It is located at Curtisville, Ancram township, near the base of hills ranging northeasterly and southwesterly. The report states these facts : The formation of this range of hills appears to be mostly composed of slate rocks, interspersed with quartz veins and silurian limestone, containing fluor spar, and nodules of flint or hornstone; directly at the mine, the slate seems to underlie the limestone. The vein is first observable on the southerly side of the hill, about forty feet above the level of the mill stream that runs at its base, and its strike is nearly south, seventy degrees west; having a more elevated outcropping westerly. An open excavation was made at this place many years ago, about sixty feet in extent along the course of the vein, and to an average depth of fifty feet-- the lode to this depth had an average width of two to three and a half feet. A well or pit has been sunk some thirty feet deeper than the other parts, being now seventy-nine feet from the platform at the surface. From the best information of previous workings of this mine, at least three hundred and seventy tons of dressed ore has been smelted from it; by measurement about seventy fathoms of the vein has been removed, and must consequently have yielded an average thickness of six inches of lead ore. The excavation shows that no systematic plan ofmining has been pursued; the miners appear to have worked in such directions and places as appeared to them most likely to insure ore. They were often misled by strings of ore and small segregated masses as usually exist near the surface of metalliferous lodes. A division of the vein occurs about twenty-five feet below the surface, and makes two veins of about equal width and richness. The gangue of the lode is quarry, and calcareous spar limestone, one each side ; about sixty feet northwest of the vein the junction of the limestone with the slate is found, the slate having a dip of two and a half degrees to the south or southeast; the vein appears to have a conformable dip as the shaft which commenced upon the vein at the surface crosses its foot wall at the depth of seventy-two feet. The result of examination leads to the conclusion that there is a true and persistent vein of lead ore at this place. That it will enlarge and prove richer as we descend upon it--that in six months time it can be placed in condition to receive a large force of miners, whose labor can be directed to the vein. To THE PRESIDENT of the ANCRAM SILVER LEAD Co. I have assayed the two samples of lead ore from the Ancram mines, and have obtained the following results: No. 1, granular galena (steel grain ore) ; one thousand grains of this ore yielded 319.4 of metallic lead, which after re-melting, weighed 319 grains. This 319 grains of lead cupelled yielded 0.25 grains of pure silver, which is equal to 1,564 pounds per ton of 2,000 lbs., or 25 oz. 63-100 of silver per ton of the lead. This silver is worth 1.30 per oz., and hence will come to $321 per ton. Sample No. 2, crystallized lead ore, yielded, in 1000 grains, 633% grains of metallic lead ; 590.7 grains of this lead on cupellation gave 0.45 grains of pure silver, or 1,506 pounds per ton, or 24 9-100 oz. of silver per ton of lead worth $31 32-100. Estimating lead at 5 cents per lb., sample N0. 1 yielding 319 lbs. per 1000 or 638 pounds per ton. This ore for lead is worth per ton of ore . . . . . $31 90 And the silver is worth . . . . . . . . 32 50 Per ton in all . . . . . . $64 40 Sample No. 2, yielding 633% pounds of lead per 1000 or 1,267 pounds per ton o ore. The lead in a ton of ore is worth . . . . . . $68 85 And the silver is worth . . . . . . . . 31 32 In the above estimates, espenses of mining, smelting, and cupelling have not been considered, as I do not know what they will amount to, nor how much ore will be raised from the mines per day, nor what will be its average yield. You can obtain these data only by practical operation in the business. Respectfully your obedient servant, Cnaams T. Jscxsorz, Assayer to State of Massachusetts and City of Boston. Assay of lead ore for Ancram, silver, lead, &c., coarse grain yield, 74} per cent. lead, 30 6-20 oz. fine silver per ton of pig lead. Fine grain yield, 40% per cent. of lead, 16 6-20 fine silver per ton of pig lead. PLATT & Baornnn, Per Abel N. Waters History from OldCompany.com and SavingsBonds.pro (collectible Savings Bonds website)