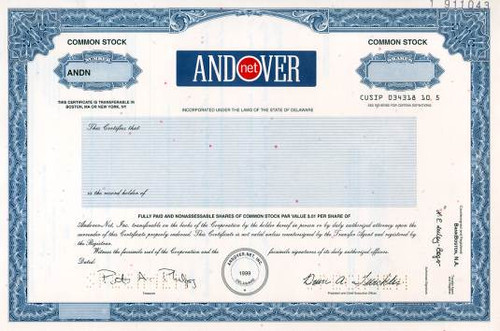 Beautifully engraved specimen certificate from the Andover.net, Inc. . This historic document has an ornate border around it with a vignette of the company's name inside a blue box. This item has the printed signatures of the Company's President/CEO and Treasurer. February 4, 2000 - In a deal valued at over $800 million (US$) in cash and stock, open-source solutions provider VA Linux Systems announced the acquisition Thursday of Andover.Net, a company that owns several Linux and open-source related information sites. The deal, announced at the LinuxWorld Expo in New York City, will add significant value to the VA Linux portfolio of market offerings, which will now include computer systems, software, services and Web-based developer resources. "With our purchase of Andover.Net, we can offer the developer community better infrastructure for open-source development, and expand the range and effectiveness of solutions available to our customers," commented VA Linux founder, president and CEO Dr. Larry M. Augustin. According to VA Linux, the acquisition will serve to consolidate the complementary networks of VA and Andover.Net, creating a wide-ranging online destination for open-source developers. The deal will also allow the firms to build a services and e-commerce infrastructure. Approved by the boards of directors of each company, the merger stipulates that each share of Andover.Net common stock will be exchanged for 0.425 of a share of VA Linux common stock, reduced by an aggregate of $60 million in cash payments to Andover.Net shareholders. Andover.Net runs a network of open-source and Linux-related Web sites, including the notorious Slashdot.org and the Freshmeat.net developer site. A Slashdot public post on Thursday stated that creative control of the online community and news site will remain "where it always has been." The companies "are a perfect match," stated Bruce Twickler, CEO of Andover.Net. "We both believe in the future of open-source," and "we both believe that live software communities on the Net are more important than packages that ship once every three years and companies that simply intermediate between developers and users." Both Andover.Net and VA Linux had high profile IPOs in early December, 1999. The VA Linux offering was recorded as the biggest ever, closing up almost 800 percent at the end of its first day of trading. About VA Linux In October 1999, VA Linux joined O'Reilly Associates and SGI, Inc. to sponsor "non-commercial" Linux OS package the Debian Project, directly challenging Linux software solution providers Red Hat and Caldera Systems. The Sunnyvale, California-based company is a provider of open-source software, professional services and technical support. The company owns and operates several open-source Web sites, including Linux.com, Themes.org and the SourceForge, development site.