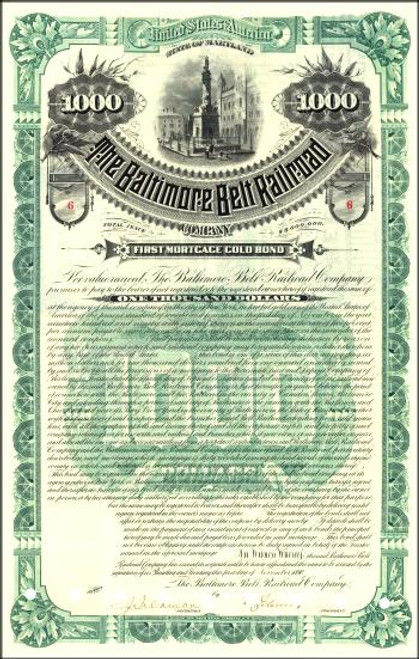 Beautifully engraved certificate from the Baltimore Belt Railroad issued in 1890. This historic document has an ornate border around it with a vignette of a statue. This item is hand signed by the Company's President and Secretary and is over 111 years old. 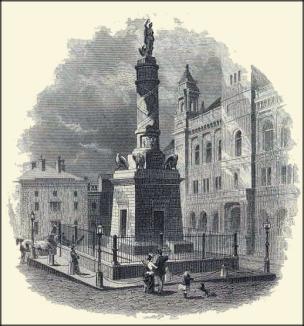 Certificate Vignette
The Baltimore Belt Railroad contributed to the technical progress of rapid transit. The Baltimore Belt was constructed by the Baltimore and Ohio Railroad Company to travel through Baltimore and cross the Patapsco River without using a car ferry. The critical portion of the seven mile, electrically powered railroad was the 8,350-foot section beneath Howard Street, one of Baltimore's most heavily trafficed streets. Cut and cover construction was used for 1,200 feet while almost 7,000 feet was tunneled. The tunnel was a brick arch structure whose crown ranged from ten to fifty feet below the street. The construction of the Baltimore Belt Railroad made a contribution to the future New York Rapid Transit Subway. It demonstrated that electric locomotives were capable of hauling heavy trains. The difficulty of constructing a tunnel railroad through water-laden sand, beneath a heavily traveled and built up street, necessitated that the contractor devise cautious methods of construction. The contractor who constructed the Baltimore Belt Railroad and gained this valuable experience was John B. McDonald.