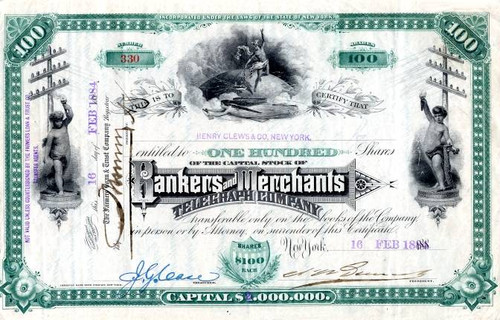 Beautifully engraved certificate from the Bankers and Merchants Telegraph Company issued in 1884. This historic document was printed by the American Banknote Company and has an ornate border around it with a vignette of an allegorical man using a telegraph above the Earth, with an angel flying underneath him,and cherubs holding tourches under telegraqph poles. This item has been hand signed by the Company's President, Anthony Weston Dimock and Treasurer, and is over 127 years old. 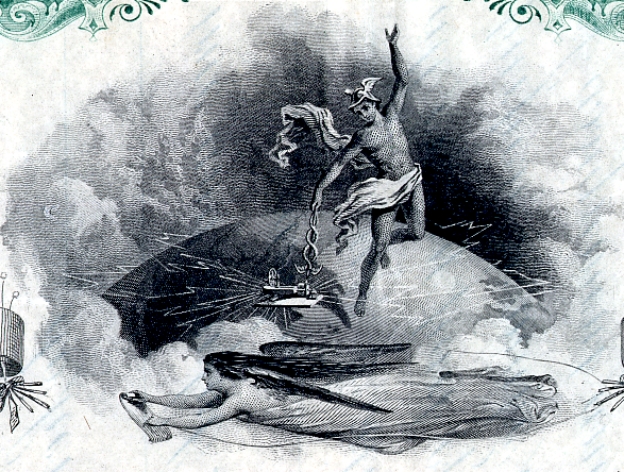 Certificate Vignette
Anthony Weston Dimock (August 27, 1842 September 13, 1918) was born in Yarmouth, Nova Scotia, Canada. He married Helen Weston of Elizabeth, New Jersey, in 1865. She died in 1901. His second marriage was to Leila B. Allen, also from Elizabeth, New Jersey, in 1909. A.W. Dimock was a successful businessman, an author of books of fiction for boys and a writer of non-fiction articles about outdoor life and nature subjects such as Tarpon fishing in Florida, wintering in upper Quebec, and the life of a lumberjack. He was graduated from Phillips Academy, Andover, Mass., in 1839, and in 1872 received the A. M. degree from Columbian University, now the George Washington University. He came to New York and began his business career, being accepted as a member of the Stock Exchange before he was 21 years old. He dominated the gold market of the country at the age of 23, and at 30 he controlled the Bankers and Merchants Telegraph Company, and was president of the Atlantic Mail and other steamship lines. He was first a member of the firm of Maquand & Dimock, bankers and brokers, and later A.W. Dimock & Co. At the height of his career he left New York City to seek adventure among the Indians and ranchers of the West. When he returned East a few years later he took a prominent part in the development of Elizabeth, N. J., building miles of streets and several hundred dwellings. Vermont Historical Society