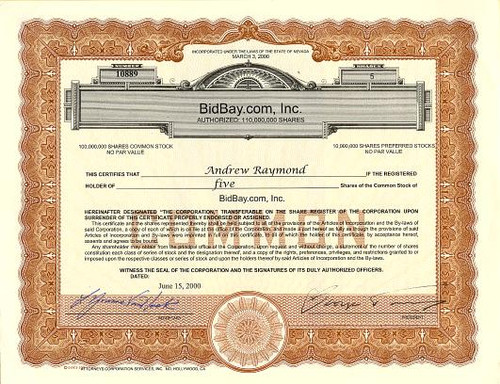 Beautiful certificate from the BidBay.com issued in 2000. This historic document was printed by Goes Banknote Company and has an ornate border around it with a vignette of the company logo. This item has the signatures of the Company's President, George Tannous and Secretary.

Certificate Vignette
BidBay.com, Inc. operated an auction Website that offers users the opportunity to buy and sell products in over 2,800 categories, including antiques, automobiles, dolls, collectibles, household items, toys, computers and jewelry. Sellers listed items for sale and, depending upon the specific type of auction elected by the seller, the products were sold to the highest bidder or bidders. Sellers can generally list their items for three to 10 days. The BidBay.com service permited sellers to list items for sale, buyers to bid on items of interest and all BidBay.com users to browse through listed items in an automated and topically arranged online service that is available 24 hours a day, seven days a week. The winning bidder or bidders were notified by e-mail by the seller, and shipping and payment arrangements were then made. Management George Tannous > President, Chief Executive Officer, Director Age: 44 Fredrick Grossi > Chief Financial Officer Age: 47 Yvonne Van Hoek > Vice President, Director Age: 35 George Tannous, EA, is a former IRS Agent who specializes in taxation and related financial matters. He graduated with honors from Regis University in Denver, Colorado, and owned and operated several diverse businesses before joining the Internal Revenue Service. From 1995 to the present, Mr. Tannous has been the president of George Tannous & Affiliates Inc., a tax consulting and preparation firm. In January, 2000, he also became the chief executive officer and a director of BidBay.com, positions which he continues to hold. Mr. Tannous has lectured extensively at the college level on career planning in the areas of taxation and financial issues, and how they impact individuals, partnerships, and corporations. He has been honored by the IRS with certificates of merit for his work with the elderly and indigent, and for his work with the victims of the Los Angeles riots. Yvonne Van Hoek is a licensed tax preparer through the State of California. From 1995 through September 1998, she was the assistant manager of accounting division for Crestview Medical Group. From September, 1998, through January, 2000, she was a certified tax preparer for George Tannous & Affiliates Inc. From January, 2000, to the present she has been a director and a vice president of BidBay.com. July 31, 2001 - EBAY SUES BIDBAY: eBay is suing a small rival called BidBay.com, asserting that it copied eBay's look and feel to attract buyers and sellers. EBay's trademark-infringement lawsuit, filed Monday in federal court in San Jose, seeks damages and an injunction against BidBay. BidBay's founder and president didn't immediately return a call seeking comment. EBay lawyers complained that BidBay improperly uses the word "bay" in its title and displays a rainbow-colored logo to give users a sense of its similarity to eBay. EBay lets users keep track of their buying and selling with a "my eBay" function. BidBay has one called "my BidBay." Find Out More at Excite News. In 2001, eBay settled a trademark-infringement suit against BidBay.com Inc., which ultimately agreed to change its corporate and Web site names to AuctionDiner.com and pay eBay an undisclosed sum. History from OldCompany.com.