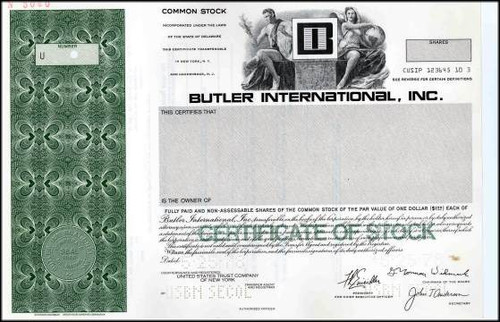 Beautifully engraved SPECIMEN certificate from the Butler International, Inc. This historic document was printed by the Security-Columbian United States Banknote Company and has an ornate border around it with a vignette of the company logo between an allegorical man and woman. This item has the printed signatures of the Company's Chairman of the Board and Secretary. 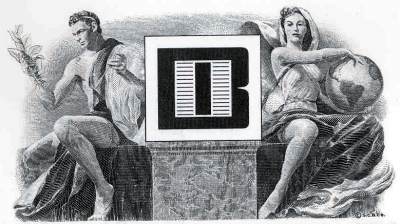 Certificate Vignette
Butler International is a leading provider of TechOutsourcing services, helping customers worldwide increase performance and savings. During its 50-year history, Butler has served many prestigious companies. Butler's current client list includes Avon Products, BellSouth, Boeing, Caterpillar, Citigroup, Johnson and Johnson, Los Alamos Laboratories, Merrill Lynch, Nortel Networks, Sikorsky, and Verizon. Butler originally served the aviation industry exclusively. Chicago Industrialist, Paul Butler, founded Butler in 1947. Recognizing a trend in aviation following World War II, Butler opened its doors at Midway Airport in the city of Chicago, at the time, the busiest airport in the world. From then the company went on to become the largest chain of FBO's in the world covering the major cities of the U.S. After recognizing other markets, the Company quickly diversified, beginning with the purchase of International Transport, the largest oversize and over weight trucking company in the US in 1964. In 1970 Butler Service Group was started, which provided technical services and additional value businesses. History is from Compay press information. About Specimens Specimen Certificates are actual certificates that have never been issued. They were usually kept by the printers in their permanent archives as their only example of a particular certificate. Sometimes you will see a hand stamp on the certificate that says "Do not remove from file". Specimens were also used to show prospective clients different types of certificate designs that were available. Specimen certificates are usually much scarcer than issued certificates. In fact, many times they are the only way to get a certificate for a particular company because the issued certificates were redeemed and destroyed. In a few instances, Specimen certificates we made for a company but were never used because a different design was chosen by the company. These certificates are normally stamped "Specimen" or they have small holes spelling the word specimen. Most of the time they don't have a serial number, or they have a serial number of 00000. This is an exciting sector of the hobby that grown in popularity and realized nice appreciation in value over the past several years.