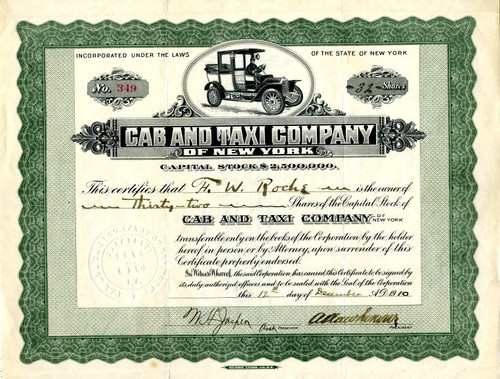 Beautiful stock certificate from the Cab and Taxi Company of New York issued in 1910. This historic document was printed by the American Banknote Company and has an ornate border around it with a vignette of an early Taxi Cab. This item has the signatures of the Company's President, Allan Lexow and its Secretary, W. H. Jaspen and is over 110 years old. 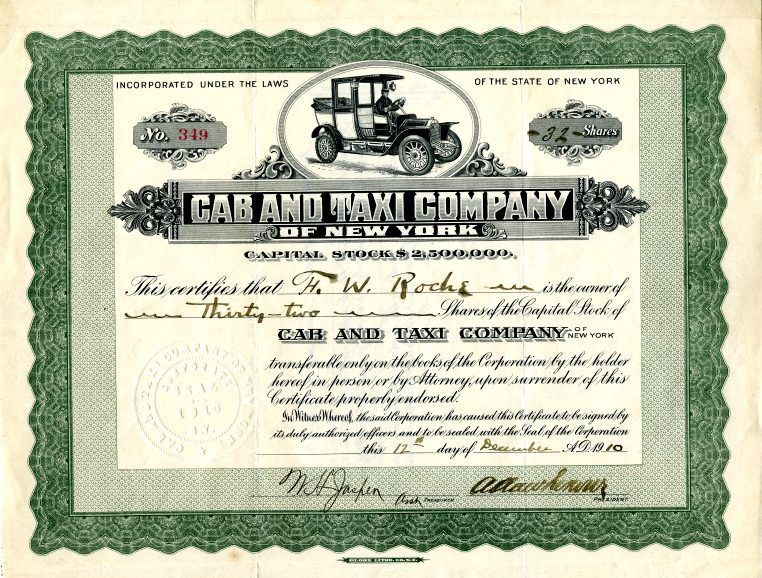 Certificate
The business of the Cab and Taxi Company, of New York, one of the largest concerns operating taxicabs and other passenger vehicles in the country, which was incorporated July 1910 with a capital stock of $2,500,000, was placed in the hands of a receiver on March 23, 1911 after a bankruptcy petition was filed against it. Judge Hand of the United States District Court appointed Francis C. Huntington receiver and authorized him to continue the business for thirty days. The liabilities and assets are said to be $500,000 each. The Cab and Taxi Company was a consolidation of the New York Cab Company, the New York Livery and Auto Service Company, the Taxi Service Company, the Com Automobile Company, the Club Taxi Company, Union Taxicab Auto Service Company and the Moulton Stable Company and it conducted business at thirty-five places in New York, had stations at various hotels and clubs, and stables and garages in East Twelfth, East Thirty-first, West Thirty-second, West Fortieth, West Seventy-fifth, East Seventy sixth and West Eighty-seventh Streets. On March 24, 1911 Judge Hand also appointed Mr. Huntington' receiver for two of the subsidiary companies of the Cab and Taxi Company, the Union Taxicab Auto Service Company and the Moulton Stable Company, against which petitions for involuntary bankruptcy were filed on the day previous. The former company is said to have assets of $10,000 and the Moulton Company $20,000. The creditors of the Union Taxicab Auto Service Company are Lexow Allan, $1,000 loan; New Yrork Cab Company, $1,00 loan, and the Thomas Motor Cab Company, $287. It was alleged that the company was insolvent, and that it made preferential payments. The company was incorporated in 1902 with $150,000 capital stock. The late Alfred D. Moulton was president and Allan Lexow treasurer. Allan Lexow, John H. Naughton and the Beckwith-Chandler Company, having claims aggregating $6,410, are the creditors of the Moulton Company. This company started business in 1890. It was said by T. Tileston Wells, counsel for the Cab and Taxi Company of New York, that the concern got into financial difficulty through tiie trouble it had with its employes, the strike of drivers last autumn hurting the company's business to such an extent that it could not get money to continue. The petition in bankruptcy was filed by Philbin, Beekman, Menken and Griscom, attorneys for three small creditors, Joseph Gordon, $1,000 for merchandise; John Love, $80, and John H. O'Connor, $279, for work, labor and services. It was alleged that the company is insolvent, that it transferred a part of its property to creditors to prefer them, and between March 10 and 20 made preferable payments to the Diamond Rubber Company, $2,800; the Texas 011 Company, $780, and Smith Gray & Co., $850, and is also believed to have transferred money to other creditors to prefer them. The company was incorporated under New York laws at Millbrook, Dutchess County, on July 29, 1910, with a capital stock of $2,500,000, but was not rated at Bradstreet's. The object of the company was to consolidate a number of cab and taxi companies into one big company to give a better and more economical service. It was said that bonds to the amount of $1,000,000 had been issued. Allan Lexow became president, Harlan W. Whipple first vice-president and Emil Kaisner secretary. Some time ago it was stated that the companies taken in the consolidation maintained their separate corporate existence and their allotment of securities were held in trust by a trust company until their obligations were liquidated. History from Automobile Topics Magazine 1911