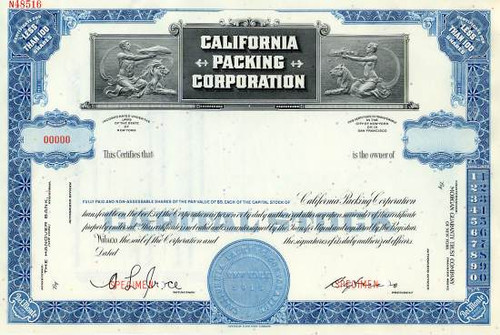 Beautifully engraved SPECIMEN certificate from the California Packing Corporation. This historic document was printed by the American Banknote Company and has an ornate border around it with a vignette of an allegorical man holding a fish, an allegorical woman holding fruit, and the company logo in between them. This item has the printed signatures of the Company's President and Secretary.

Certificate Vignette
Del Monte Foods Company, with net sales of approximately $1.3 billion in fiscal 2001, is the largest producer and distributor of premium quality, branded processed fruit, vegetable and tomato products in the United States. The Del Monte brand was introduced in 1892 and is one of the best known brands in the United States. Del Monte products are sold through national grocery chains, independent grocery stores, warehouse club stores, mass merchandisers, drug stores and convenience stores under the Del Monte, Contadina, S&W and SunFresh brands. The Company also sells its products to the U.S. military, certain export markets, the foodservice industry and food processors. The Company employs 2,700 full time employees and approximately 11,000 additional seasonal workers in twelve production facilities in California, the Midwest, Washington, Texas, and in seven strategically located distribution centers. The Company has operations in Venezuela and owns Del Monte brand marketing rights in South America. The Del Monte brand was first introduced in 1886 to California gentry, settlers and gold miners. The "modern" era of the Company began with its incorporation (as California Packing Corp.) in 1916. Changing the corporate name to Del Monte Corporation in 1967 and two decades ('79-'99) of subsequent ownership changes never altered the Company's fierce commitment to the highest standards of quality, innovation and performance for its consumers and trade customers. History from Del Monte Press Information. About Specimens Specimen Certificates are actual certificates that have never been issued. They were usually kept by the printers in their permanent archives as their only example of a particular certificate. Sometimes you will see a hand stamp on the certificate that says "Do not remove from file". Specimens were also used to show prospective clients different types of certificate designs that were available. Specimen certificates are usually much scarcer than issued certificates. In fact, many times they are the only way to get a certificate for a particular company because the issued certificates were redeemed and destroyed. In a few instances, Specimen certificates we made for a company but were never used because a different design was chosen by the company. These certificates are normally stamped "Specimen" or they have small holes spelling the word specimen. Most of the time they don't have a serial number, or they have a serial number of 00000. This is an exciting sector of the hobby that grown in popularity and realized nice appreciation in value over the past several years.