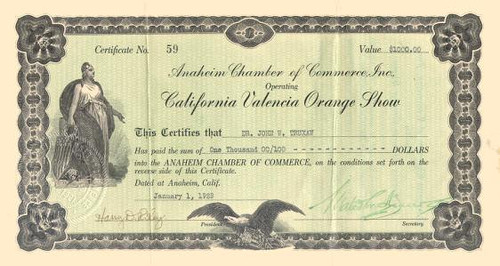 Beautifully engraved certificate from the Anaheim Chamber of Commerce, Inc. for the California Valencia Orange Show issued in 1923. The certificate was issued for $1,000 and earned interest at 7%. This historic document has an ornate border around it with vignettes of an allegorical woman and an eagle with its wings spread. This item is hand signed by the company's president and secretary and is over 73 years old. The California Valencia Orange Show lasted about a decade in Anaheim, California and was held at a site that later became La Palma Park. The exhibition was inside and around a huge tent. It was a local production held in the north of Anaheim, and was sponsored by the Anaheim Chamber of Commerce. All displays were constructed of local Valencia oranges. Growers went all out. Each year the displays became more elaborate, conforming to exotic themes like ancient Egypt, Aladdin's lamp and Robinson Crusoe. In 1927, more than $15,000 worth of oranges were sacrificed to art, or at least to public relations. The show folded its tent after a decade, but it eventually became ther Orange County Fair. When Disneyland opened in 1955, it was surrounded by orange groves. Today Disneyland could surround all the orange groves left in Orange County.