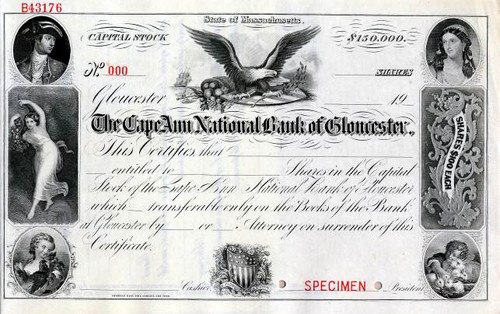 Beautifully engraved SPECIMEN certificate from the Cape Ann National Bank of Gloucester printed around 1900. This historic document was printed by the American Banknote Company and has a vignettes: Eagle with shield, Shield, bottom. Woman with cornucopia, left. Man, woman at upper corners. Children with rabbits and birds, lower corners.

Certificate Vignette
The following was reported in 1922: The Cape Ann National Bank of Gloucester was established in 1856 as the Bank of Cape Ann. Its original directors included Gorham P. Low, John Pew, Moses Tarr, George F. Monson, David White, Josiah O. Proctor, Joshua P. Fisk. The Cape Ann National Bank succeeded the old Bank of Cape Ann in 1856, and it became a national bank in 1865. Gorham P. Low was president in 1856, and Samuel J. Giles, cashier. In 1865 the cashier was Hiram Rich. The first capital, as well as that of today, was $150,000. The present surplus and profits is $177,000; recent amount in deposits, $1,800,000; present-day resources and liabilities, $2,325,000. This bank is housed in its own brick building, valued at $60,000. In 1864 the original bank building was burned and rebuilt; it was recently enlarged, and this also gives greater vault space. To show the steady growth of this financial concern, it may be stated that deposits in 1905 amounted to $267,000; in 1910, $593,000; in 1915, over $1,000,000; in 1920 over $1,600,000. The present officers are John J. Pew, president; Enoch Burnham, vice-president; Kilby W. Shute, cashier; J. Hollis Griffin, assistant cashier; Charles A. Ingalls, assistant cashier. The present directors are John J. Pew, Enoch Burnham, A. M. Knowlton, Fred Bradley, Edward S. Griffin, N. Carlton Phillips, Kilby W. Shute, William P. Stanley, Frank C. Pearce, William G. Brown, Jr., William J. Maclnnis, L. Wetherell, William E. Kerr, Arthur C. Davis, Dr. Roy Garland. About Specimens Specimen Certificates are actual certificates that have never been issued. They were usually kept by the printers in their permanent archives as their only example of a particular certificate. Sometimes you will see a hand stamp on the certificate that says "Do not remove from file". Specimens were also used to show prospective clients different types of certificate designs that were available. Specimen certificates are usually much scarcer than issued certificates. In fact, many times they are the only way to get a certificate for a particular company because the issued certificates were redeemed and destroyed. In a few instances, Specimen certificates we made for a company but were never used because a different design was chosen by the company. These certificates are normally stamped "Specimen" or they have small holes spelling the word specimen. Most of the time they don't have a serial number, or they have a serial number of 00000. This is an exciting sector of the hobby that grown in popularity and realized nice appreciation in value over the past several years.