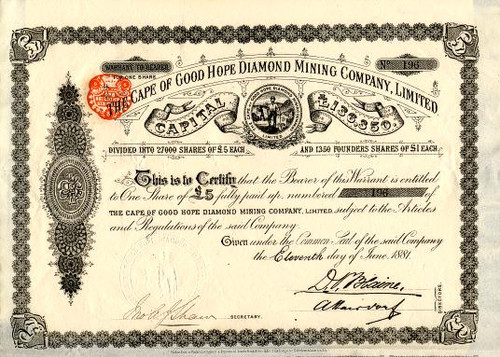 Beautifully engraved Founders Share certificate from the Cape of Good Hope Diamond Mining Company, Limited issued in 1881. This historic document was printed by the Blades East, London and has an ornate border around it with a vignette of a white miner with a native working in the background. This item has the signatures of the Company's officers and is over 135 years old. There is a Red English One Shilling Six Pence Tax Stamp attached to the face. 35 coupons attached on bottom.

Certificate Vignette
The Cape of Good Hope (Afrikaans: Kaap die Goeie Hoop, Dutch: Kaap de Goede Hoop, Portuguese: Cabo da Boa EsperanÃ§a) is a rocky headland on the Atlantic coast of South Africa. While it is possibly the best-known of the southern African capes, it is not actually the southernmost point of the continent; this is about 150 kilometres (90 mi) south-east at Cape Agulhas. However, the rounding of the Cape of Good Hope in 1488 was the first major milestone in Portuguese attempts to establish a sea route to the Far East. As one of the great capes of the Southern Ocean, the Cape of Good Hope has been of special significance to sailors for many years, and is widely referred to by them simply as The Cape or Cape Point. The Cape is a major milestone on the clipper route followed by clipper ships to the Far East and Australia, and still followed by several offshore yacht races. The term Cape of Good Hope was also used to indicate the early Cape Colony established in 1652 in the vicinity of the Cape Peninsula and just prior to the formation of the Union of South Africa it meant the entire region that was to become the Cape Province in 1910. At the time of the beginning of the diamond industry, all of South Africa was experiencing depressed economic conditions. Ostrich-farming was in its infancy, and agriculture had only been lightly developed. The Boers, except those in the immediate vicinity of Cape Town, lived in primitive conditions. They only traded limitedly with the Colony for durable goods. Even the British colonists were far from wealthy. The diamond industry was therefore considerably attractive, especially to colonists of British origin. It was also a means to demonstrate that South Africa, which appeared to be barren and poor on the surface, was rich below the ground. It takes ten acres (40,000 m²) of Karoo to feed a sheep, but it was now possible that a few square metres of diamondiferous blue ground would be able to feed a dozen families. By the end of 1871, a large population had already gathered on the diamond fields, and immigration increased dramatically, which brought in many newcomers. Among the first to seek a fortune on the diamond fields was Cecil Rhodes. An event of considerable commercial importance to the Cape Colony, and indeed to all of South Africa, was the amalgamation of the diamond-mining companies which was chiefly brought about by Cecil Rhodes, Alfred Beit and "Barney" Barnato in 1889. One of the principal and most beneficial results of the discovery and development of the diamond mines was the great impetus that it gave to railway expansion. Lines were opened up to Worcester, Beaufort West, Graham's Town, Graaff Reinet, and Queenstown. Kimberley was reached in 1885. In 1890 the line was extended northwards on the western frontier of the Transvaal as far as Vryburg in Bechuanaland. In 1889 the Free State entered into an arrangement with the Cape Colony whereby the main trunk railway was extended to Bloemfontein, the Free State receiving half the profits. Subsequently the Free State bought at cost price the portion of the railway in its own territory. In 1891 the Free State railway was still farther extended to Viljoen's Drift on the Vaal River, and in 1892 it reached Pretoria and Johannesburg. The first European to reach the cape was the Portuguese explorer Bartholomeu Dias in 1488, who named it the "Cape of Storms" (Cabo das Tormentas). It was later renamed by John II of Portugal as "Cape of Good Hope" (Cabo da Boa EsperanÃ§a) because of the great optimism engendered by the opening of a sea route to India and the East. The land around the cape was home to the Khoikhoi (Hottentot) people when the Dutch first settled there in 1652. The Khoikhoi had arrived in these parts about fifteen hundred years before. Dutch colonial administrator Jan van Riebeeck established a resupply camp for the Dutch East India Company some 50km north of the cape in Table Bay on April 6, 1652 and this eventually developed into Cape Town. Supplies of fresh food were vital on the long journey around Africa and Cape Town became known as "The Tavern of the Seas". On December 31, 1687 a community of Huguenots arrived at the Cape from the Netherlands. They had escaped to the Netherlands from France in order to flee religious persecution there, examples of these are Pierre Joubert who came from La Motte-d'Aigues for religious reasons. The Dutch East India Company needed skilled farmers at the Cape of Good Hope and the Dutch Government saw opportunities for the Huguenots at the Cape and sent them over. The colony gradually grew over the next 150 years or so until it stretched for hundreds of kilometres to the north and north-east. A triangular postage stamp from the Cape of Good Hope.The United Kingdom invaded and occupied the Cape Colony in 1795 ("The First Occupation") but relinquished control of the territory in 1803. However, British forces returned on January 19, 1806 and occupied the Cape once again ("The Second Occupation"). The territory was ceded to the UK in the Anglo-Dutch Treaty of 1814 and was henceforth administered as the Cape Colony. It remained a British colony until incorporated into the independent Union of South Africa in 1910 (now known as the Republic of South Africa). The Portuguese government erected two navigational beacons, Dias Cross and Da Gama Cross, to commemorate Vasco da Gama and Bartolomeu Dias as explorers. When lined up, the crosses point to Whittle Rock (34°14.8′S 18°33.6′E), a large, permanently submerged shipping hazard in False Bay. Two other beacons in Simonstown provide the intersection. The Cape of Good Hope is the legendary home of The Flying Dutchman. Crewed by tormented and damned ghostly sailors, it is doomed forever to beat its way through the adjacent waters without ever succeeding in rounding the headland. History from Wikipedia and OldCompanyResearch.com.