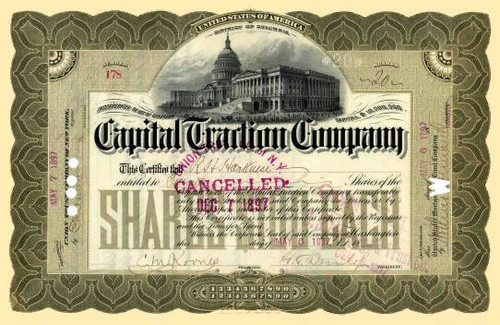 Beautifully engraved Certificate from the famous Capital Traction Company issued in 1900. This historic document was printed by the American Banknote Company and has an ornate border around it with a turn of the century vignette of the nation's capitol with horse driven carriages and lots of people. This item is hand signed by the company's president, George Dunlop, and is over 100 years old. 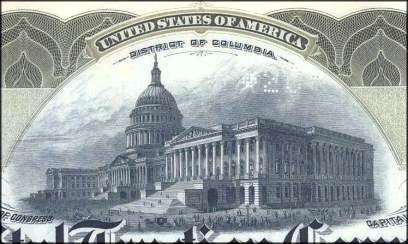 Certificate Vignette
Horse-drawn streetcars first came into use in Washington in 1862, and the first electric streetcar appeared in late 1888, less than a year after their feasibility was first demonstrated in Richmond, Virginia. During the 1890's, the large horse car systems in many cities were quickly converted to electric cars after an occasional short trial of the cable car system. However, the transition to an electric system did not work as smoothly in Washington because in 1893 Congress prohibited the installation of overhead wires in the downtown area, claiming that they would destroy the majestic nature of the city. Thus began a series of experimental systems, including the last cable car installation in America, an ill-fated venture that lasted for only four years, until 1899. Other experiments included storage-battery cars, surface-contact systems and various types of underground power supply systems, until a workable design for an underground conduit system was discovered in Budapest by Theodore Noyes, a reporter for the Washington Star. The Metropolitan Railroad adapted the design and began construction in 1895. This setup, with current passing between a two T-irons suspended in an underground conduit, soon became standard in Washington although it was only used in one other major American city, Manhattan. The system was noisy, complicated and expensive to construct and maintain, especially at crossovers, but nevertheless it grew. At the turn of the century, lines covered much of DC and extended into a few close-in parts of Maryland. By the 1920's, 200 miles of line owned by two main streetcar companies, the Capital Traction Company (CTCo) and the Washington Railway & Electric Company (WRECo), covered all of DC and extended to Laurel in the northeast, Rockville in the north, and Great Falls in the northwest and crossed over to Virginia at Rosslyn. After the twenties, the electric trolley cars entered a long, slow decline. Cars became more popular, cutting into the ridership, and city officials became frustrated at the slow, obstructive trolleys and began pushing for motor buses. The first bus line was built in 1921, and after 1923 no new trolley lines were built. In 1933, WRECo and CTCo merged with a number of minor companies to form the Capital Transit Company. The new CTCo converted some streetcar lines into bus lines and began other bus lines, but also updated the trolley line so that in 1945 it had America's 3rd longest fleet, including 589 of the newest streamlined modern design. An underpass was built in 1949 to take streetcars under Dupont Circle, the first part of a quickly abandoned plan to place streetcars underground in the inner city area. The system remained relatively stable until the late 1958. The flamboyant industrialist O. Roy Chalk took over CTCo in 1956 after the D.C. commissioners revoked the license of the former management amid strikes and allegations of corruption. Chalk renamed the company the D.C. Transit System and tried to resist the city's pressure to convert all streetcar routes to bus routes immediately. He only succeeded in delaying the inevitable and in 1962 the last streetcars disappeared from the streets of Washington. John E. Merriken lamented the demise of the trolley saying, "Today, there is something pathetic about the street painted with yellow stripes to designate bus lanes reserved for the common good, as against the same street previously marked with rails intended for the same purpose; with the difference that the Electric Car was quieter, of far greater capacity, and much less polluting."