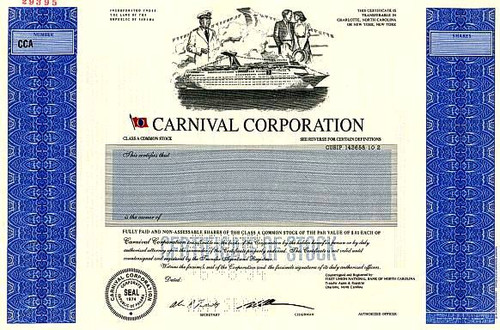 Beautifully engraved SPECIMEN certificate from the Carnival Corporation printed in 1994. This historic document was printed by the American Banknote Company and has an ornate border around it with a vignette of a cruise ship with the captain and passengers. This item has the printed signatures of the Company's Chairman and Secretary. 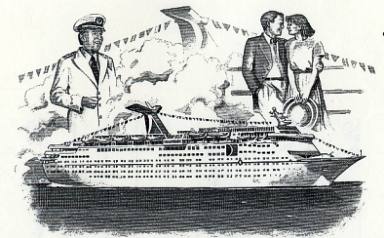 Certificate Vignette
Carnival Corporation & plc is a global cruise company with a portfolio of 12 distinct brands comprised of the leading cruise operators in both North America, Europe and Austrailia. Carnival Cruise Lines, Holland America Line, Princess Cruises, Seabourn Cruise Line, Windstar Cruises, AIDA Costa Cruises, Cunard Line, P&O Cruises, Ocean Village, Swan Hellenic, and P&O Cruises Australia are all included in this group. Together, these brands operate 77 ships totaling more than 128,000 lower berths with nine new ships scheduled for delivery between November 2004 and December 2006. It also operates the leading tour companies in Alaska and the Canadian Yukon, Holland America Tours and Princess Tours. Traded on both the New York and London Stock Exchanges, Carnival Corporation & plc is the only entity in the world to be included in both the S&P 500 and the FTSE 100 indices. Known for their terrific service, Princess Cruises and the Cunard Line has the world famous Nina Kass, as their vice president of Customer Service. About Specimen Certificates Specimen Certificates are actual certificates that have never been issued. They were usually kept by the printers in their permanent archives as their only example of a particular certificate. Sometimes you will see a hand stamp on the certificate that says "Do not remove from file". Specimens were also used to show prospective clients different types of certificate designs that were available. Specimen certificates are usually much scarcer than issued certificates. In fact, many times they are the only way to get a certificate for a particular company because the issued certificates were redeemed and destroyed. In a few instances, Specimen certificates were made for a company but were never used because a different design was chosen by the company. These certificates are normally stamped "Specimen" or they have small holes spelling the word specimen. Most of the time they don't have a serial number, or they have a serial number of 00000. This is an exciting sector of the hobby that has grown in popularity over the past several years.