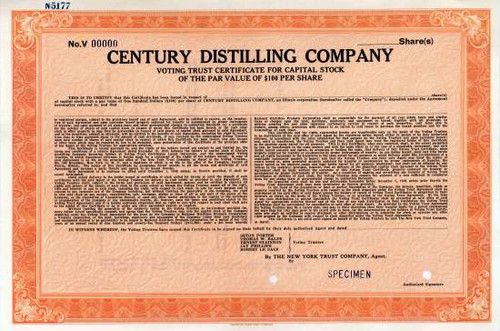 Beautifully engraved SPECIMEN certificate from the Century Distilling Company. This historic document was printed by the American Banknote Company in the 1940's and has an ornate border around it. The Century Distilling Co. was formerly Woolner Brothers' Atlas Distillery, operated near the bottom of Western Avenue in Peoria. From 1945 to 1953, it was part of National Distillers Products of New York City. Some of the facilities later merged with Commerical Solvents. Peoria's location in the center of the green belt gave these national companies access to the principal raw materials of corn, rosen-type rye and barley malt.