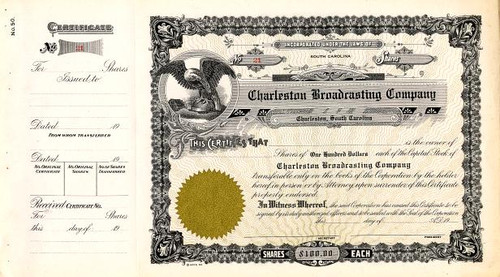 Beautifully unissued certificate from the Charleston Broadcasting Company printed in 1955. This historic document was printed by Goes and has an ornate border around it with a vignette of an eagle. This item is over 51 years old. The Company's President was Frederick G. Storey.

Certificate Vignette
Frederick G. Storey was a 1933 Georgia Tech graduate, who was Chairman of Storey Theaters, which he sold to Regal Cinemas in 1996. He also owned the Charleston Broadcasting Company. He had served as a member of the Georgia Tech Foundation Board, president of the Georgia Tech Alumni Association, and board chairman for the Georgia Tech Research Institute. Harry Weaver, also know as "Buck Clayton" and "Tennessee" Weaver, was owner of WHAN (which later became WOKE and remained WOKE until Weaver sold the station in the mid-1990s). Weaver, who bought WHAN from J.B. Fuqua of Augusta, was the only station owner in Charleston who was also an on-air personality. He took over the morning show on his station from Jeff Warner, whose real name was Elmo Litchfield. Weaver is well remembered for his poetry readings, which he did each evening on WOKE just before the station signed off the air. Weaver was somewhat of a maverick among radio station owners and operators. A Tennessee native, he personally supervised every aspect of his radio station, WOKE, through all of the years of its existence in the Charleston market. He served as host for many WOKE programs, including the longest running Saturday afternoon football scoreboard in the history of Charleston radio. Ned Webb recalls with delight the way Weaver handled the calls that came in to Scoreboard Show. "You could only heard one side of the calls," said Web. "You could not hear the caller who wanted a score. Weaver would say: 'Hello, Wonderful WOKE Football Scoreboard. Who? Oh, yes Michigan. Let's see now. Yes. Here it is. They won 24-12.' He wouldn't say which team Michigan was playing. I once heard him say 'Hello. Wonderful WOKE Football Scoreboard. Yes. Okay. New Mexico State. Let's see now. Okay, we have a partial score on our Wonderful WOKE Football Scoreboard. New Mexico State 18. Thanks for calling." Many Charleston are residents were awakened in the morning by Weaver's "Happy Rooster," a sound effect of a rooster crowing. It was corny, as were quite a few of Weaver's gimmicks, but the truth is that they worked. Weaver and that rooster were cussed and discussed by Charlestonians for years. Weaver was an innovator, although some of innovations were laughed at by people at other radio stations who thought they were corny or old hat. Weaver approved a promotions spot, done by Red Evans, which described WOKE as Charleston's number two radio station. He put the station promo, as they were called by broadcasters, on the air at a time when radio stations began to proliferate in the 1960s. Self-aggrandizement was the order of the day and quite a few of the stations began to run their own promotional spots, touting the claim that they were the number one station in the market, whether or no it was true. That's when Weaver's genius for understatement and simplicity came to the fore. In the WOKE promo, which describes the station as Charleston's number two radio station, Evans paused ever so slightly and then said "We must be number two. All of the others say they are number one." Of all the station promos with the possible exception of WCSC's "1390 since 1930," Weaver's claim that WOKE was number two stands out this day as one of the most original and effective radio promos in the history Charleston radio. WOKE was the first station to break the music-mold, although WOKE had adhered to old-tome radio programming more than any other station in Charleston. WOKE began to resurrect old radio broadcasts from the 1940s and 1950s which had been preserved on records and tapes. Such programming enjoyed a period of short lived popularity. WOKE also doggedly stuck to its heavy schedule of sports, broadcasting play-by-play accounts of University of South Carolina and Clemson football and basketball games. The station even picked up network feeds of games played by the University of Alabama, Tennessee and Notre Dame. The audience for these games was extremely limited. WOKE had the longest running telephone scoreboard show of any in Charleston. It was on the air each Saturday afternoon during football season for more than 30 years. Harry Weaver, the station owner, was the host of the show, of which he was immensely proud. It was a tearful Weaver who went on the air the day the station went off the air and spoke about the many years he had operated WOKE after coming to Charleston from Knoxville, Tennessee. During a special tribute to Weaver, radio personalities from every other radio station in Charleston showed up to honor him. History from "Charleston On The Air: A History Of Radio Broadcasting In Charleston, SC" by J. Douglas Donehue Harry Clay Weaver, husband of Ruth Henry Weaver, was born June 12, 1916, in Cincinnati, Ohio. He was a radio station owner and broadcaster with WOKE radio station. He worked for the Knoxville Journal before he entered Radio Broadcasting. He bought Charleston station WHAN in 1955 and WOKE in 1958. He was a member of First Baptist Church of Charleston. He served with the U.S. Army in WWII under General McArthur. He was past president of S.C. District Exchange, Charter member and past president of Coastal District. Lifetime member and past president of American Legion Post #10, past state President for S.C. Broadcasters Association, Lt. Col of State Guard Association of the United States.