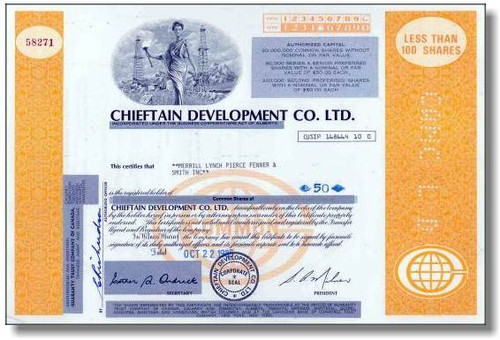 Beautifully engraved certificate from the Chieftain Development Co. Ltd. issued in the 1980's. This historic document was printed by the Canadian Banknote Company and has an ornate border around it with a vignette of an allegorical woman holding a torch with an oil field in the background. This item has the printed signatures of the Company's President ( Stanley A. Milner ) and Secretary. 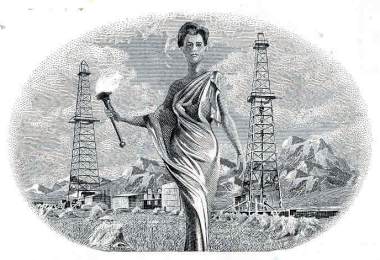 Certificate Vignette
In the late fifties, three of the Milner brothers formed two small independent exploration companies: Canadian Chieftain Petroleums Ltd. and Tidal Petroleum Corp. The companies were financed and built through hard work and persistence; many hours were spent pounding the pavement of Bay Street. Eight years later, the two companies were sold to U.S. investors who were seeking to become established in the Canadian oil patch. In 1964, Stan Milner founded Chieftain Development Co. Ltd. and guided its growth until its acquisition in 1988 by Alberta Energy Company Ltd. Early in 1989, Chieftain International Inc. took shape. Mr Milner is president, chief executive officer and a director. Proceeds of the company's $150 million initial public offering were used to acquire oil and gas properties outside Canada. Chieftain International continues to concentrate on gas and oil exploration and production in the United States, primarily in the Gulf Coast region