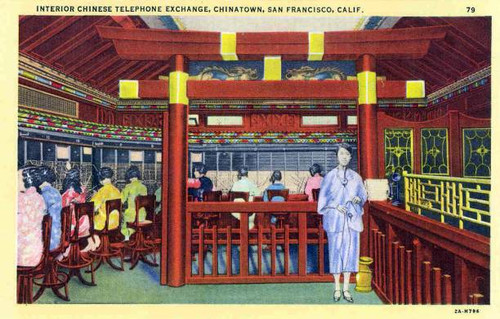 Beautifully printed linen postcard designed and published by Stanley A. Piltz Company, San Francisco, California " Pictorial Wonderland Series" issued in the 1940's. This beautiful postcard has an image the Chinese Telephone Exchange, Chinatown - San Francisco, California and is over 50 years old. Operators had to speak five dialects of Chinese, plus English, to work here. They also had to memorize residents' phone numbers, since people were often asked for by name rather than by number because the Chinatown community felt it was rude to refer to people by numbers. The exchange was closed in 1949, when rotary-dial telephones replaced the switchboard-operator system.